You are here: Home > Public News > Army Cadet Serves as Key Bearer for Act of Loyalty Parade
◄Back to News 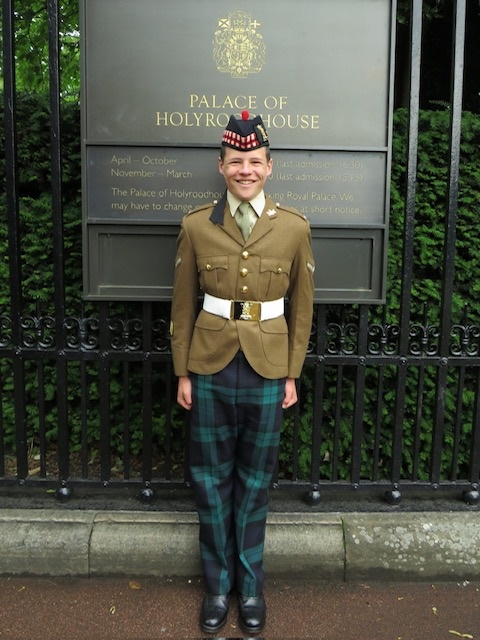 As part of Royal Week 2022, a member of Lothian & Borders Battalion  represented Scotland’s Army Cadet Force during the Act of Loyalty Parade held for Her Majesty The Queen at the Palace of Holyroodhouse, Edinburgh.

Along with representatives from the Air and Sea Cadets, Lord-Lieutenant’s Cadet Corporal David Jackson met with the Governor of Edinburgh Castle Major General Alastair Bruce prior to the parade.

Assisting the Governor at the Equerry’s Door of the palace, Cadet Cpl Jackson was named as the key bearer in the presentation to Her Majesty of the key to Edinburgh Castle. This symbolic gesture commemorated the 200th anniversary of King George IV’s 1822 visit to Scotland, the first visit of a reigning monarch to the country in almost two centuries. It was also one of many events celebrating the Queen’s Platinum Jubilee.

Reflecting on the experience, Cadet Cpl Jackson said: ’I was very pleased and excited when I was asked if I would like to attend the Act of Loyalty Parade for the Queen at Holyrood Palace. It was Major General Bruce who told me I would be the key bearer. I knew this was an incredible privilege and I felt very honoured.

‘It was an amazing experience and I felt very fortunate and proud to have been involved in the ceremony.’ 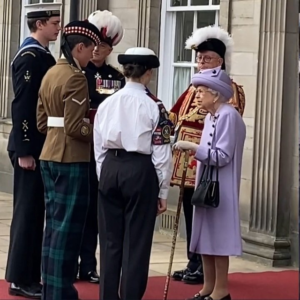 On the Friday before the Parade, Cadet Cpl Jackson attended a rehearsal at the palace with the Governor and other Cadet representatives. He was accompanied by his mother Pippa Jackson, who said of the event: ‘We were all very excited when David was asked if he could attend the Act of Loyalty Parade. It is an incredible honour to be asked, but even more so being asked to be the bearer of the key to Edinburgh Castle.

‘The whole family is so incredibly proud of David and so thrilled for him that he has been able to experience meeting Her Majesty.’