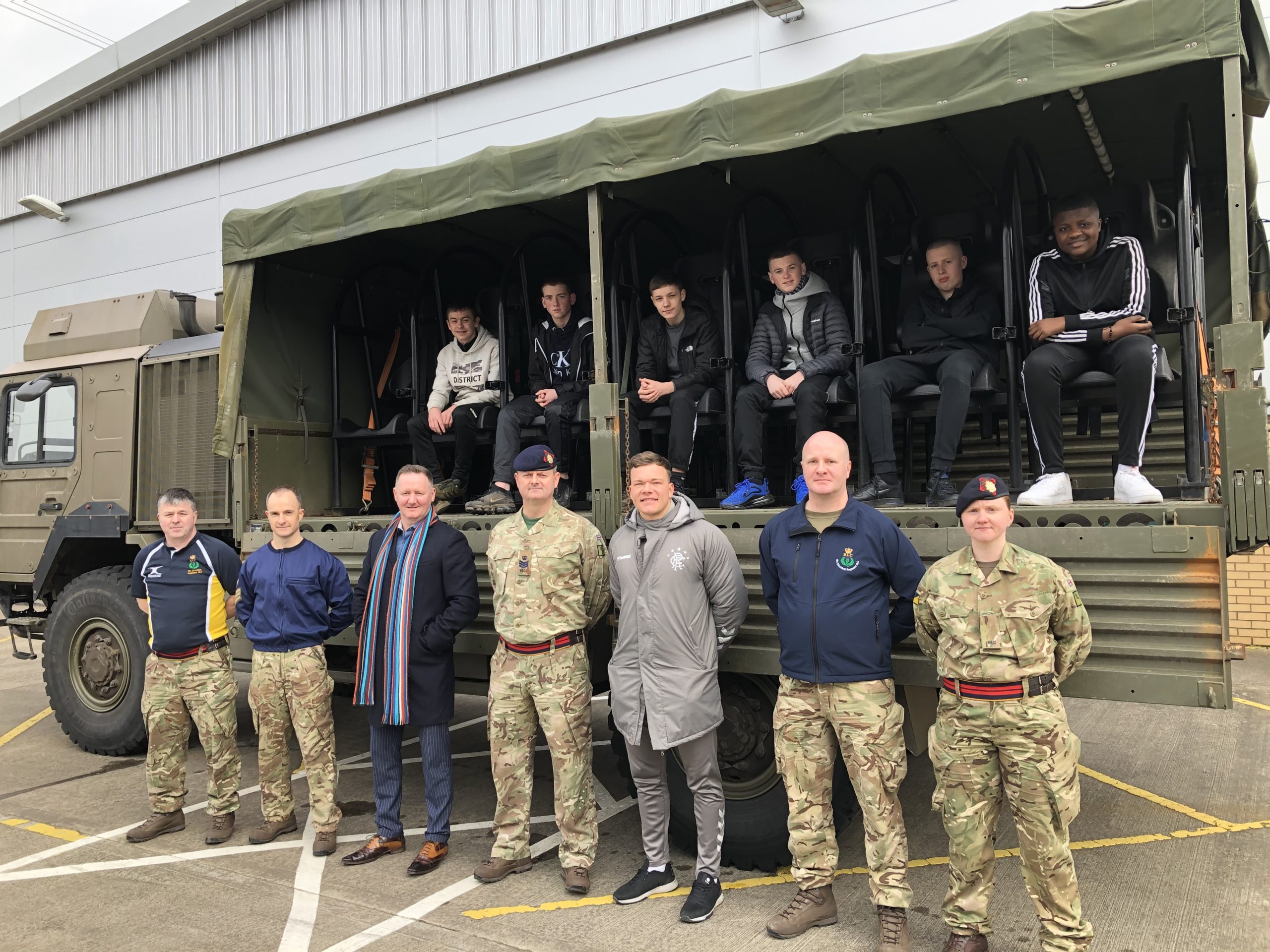 An Army Reserve unit gave a group of high school pupils a day to remember as they were granted exclusive access to the barracks to learn about the vast amount of jobs available to them within the military.

The football club’s official charity works with over 80 young people in schools throughout Glasgow and the surrounding areas to re-engage them with their education and to help them build a brighter future.

And as part of the pupils’ learning, the Foundation are introducing groups to organisations in various job sectors to broaden their knowledge of employment after they leave school.

Jamie Duncanson, Rangers Charity Foundation Senior Community Executive, thanked 221 Transport Squadron RLC and Lowland RFCA for inviting the group who were introduced to roles in the Army which include engineering, mechanics, logistics and communications.

He said: “Maybe not all but certainly a good percentage of these kids are not engaging in school. So we started the Wider Achievement Programme and we try to give them as much exposure to the other sectors and employability routes as we can.

“Because we are a SQA Approved Centre, that means we can also offer SQA Awards and other qualifications from SCQF levels 1 to 6.

“We work with a number of schools where around 80 young people come one day a week for the whole academic term and St Paul’s has been one of our partner schools for the past few years.

“We are aiming to broaden their knowledge within the sectors and to give them different ideas of the pathways available.”

The day began with a presentation to the pupils of the jobs on offer as an Army Regular or Reservist. They were then put through their paces during standard Army fitness tests which measured their stamina, upper and lower body strength.

Next the teens’ communication and leadership skills came to the fore in a command task before they were shown round the specialist vehicles in the unit grounds and took part in a weapon presentation.

Corporal Simeon Ewing was among the Reservists of 221 Transport Squadron RLC  to give the pupils a taste of Army life.

He said: “School is not for everybody. I left school at 16 so I can feel where the boys are coming from.

“In the Army we live by values and standards. We encourage discipline, integrity, loyalty and commitment. These are things people talk about in the civilian organisations but it is a strong part of being a soldier. You don’t find that kind of ethos often in civvy street.

“They are going to gain some of that understanding by taking part in the command tasks and going through the physical activities. It’s an experience that they are going to hold within their group for a long time.

“If the boys were to join as a Reservist, the skills you gain in the Army can also be taken into Civilian life and that looks good on any CV.”

Unit Staff Sergeant Mark Garrity said it was a pleasure to welcome the pupils and the Rangers Charity Foundation – a Gold Employee Recognition Scheme award winning organisation – on base.

He added: “We want to get the word out about the Army, Regular and Reserve.

“A lot of people will look at the Army on the television and they will see front line soldiers. And the main aim for today is to showcase the variety of jobs available within the organisation.

“We went into detail with the presentation because people wouldn’t think you could come and join the Army and be a plumber or an electrician.”

Click here to find out more about joining the Army Reserve.