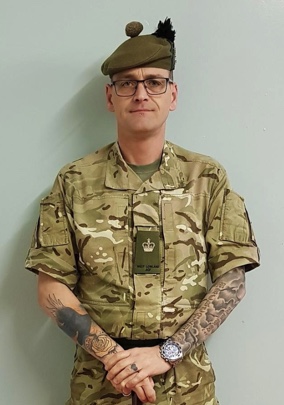 An Army Cadet Force Adult Volunteer is determined not to be weighed down by expectation once he chains himself to a 3kg medicine ball to raise awareness of the impact post-traumatic stress has on those who have served in the Armed Forces.

Company Sergeant Major (CSM) Jonny Marshall, of the West Lowland Battalion ACF, will be carrying an extra weight on his shoulders for seven days to raise funds for Combat Stress –the UK’s leading charity for veterans who deal with issues like trauma, anxiety, depression and Post-Traumatic Stress Disorder (PTSD) – The Soldiers Charity and mental health charity, Mind.

As part of the Medicine Ball Challenge, CSM Marshall will be handcuffed to the weight normally found in a gymnasium, which represents the mental burden service personnel and veterans could be carrying around with them every day, from 10-16 February 2020.

CSM Marshall from Annan served with the Royal Engineers as a regular before being discharged after gaining an injury during training and hopes to spark more conversations about mental health.

He said: “PTSD is an extremely damaging, dangerous and potential deadly condition affecting a great number of former service men and women as well as those working in the emergency services all around us.

“Let’s help raise awareness and much needed funds to help the brave men and women who need that help to get over the obstacles in life.”

CSM Marshall will have to wear the cuffs at all times while conducting his normal work and also during all Cadet activities. He will only be allowed to remove his restraint when dressing, driving and sleeping.

He will attend a number of fundraising events throughout the week after he is chained to the medicine ball at a ceremony on Monday, 10 February at the Annan Detachment of the Army Cadets.

The week will end following the climbing of Criffel, a 1,870ft high hill in Dumfries, by a team of Cadet Force Adult Volunteers carrying a number of visible burdens along with them which resemble the mental weight veterans can carry.

The team will also be visiting the Dumfries Veterans Garden – a community project which supports war veterans with combat stress problems and other military and emergency service related issues.

Patron of the Veteran’s Garden and also the Annan Cadet Detachment, Councillor Archie Dryburgh MBE, said: “The effort of this challenge is no mean feat for all those who have and will take part over the duration of this campaign.”

West Lowland Battalion ACF’s Major Stuart Gray, Officer Commanding Minden Training Group, said: ”I feel very proud of my CSM for volunteering for the fundraising activities that are being delivered across the region for the week.

“A large number of my cadet instructor staff have served in the Armed Forces and we have all seen the effect of PTSD around us on our friends, colleagues and comrades form our time in the services.”