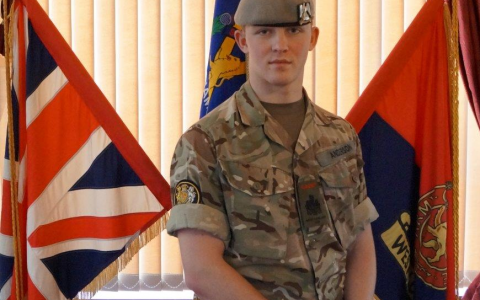 Cadet Regimental Sergeant Major Anderson is West Lowland Battalion’s most senior and most successful Cadet. He joined the Army Cadets with a friend in 2012, and while his friend decided that the Army Cadets wasn’t for him, he has thrived in the Cadets.

As well as being a Master Cadet – the highest award in the Army Cadet Force – he is the only Cadet in the Battalion to hold the rank of Cadet RSM.

“I had spent time away from home, so when I joined the Army Cadets I really enjoyed the time away at weekend and at annual camp.

“I like getting to know new people and doing things I wouldn’t normally get to do. I really enjoy fieldcraft and skill-at-arms”

In addition to being the most senior Cadet in West Lowland Battalion (which covers an area from Dumfries & Galloway in the south, to Inverclyde and Renfrewshire in the north) Cadet RSM Anderson continues to attend Garnock Valley Detachment ACF in Beith on Wednesday evenings.

“Through the week my role is teaching younger cadets on all subjects in the APC syllabus.

“I also sit in on Cadets delivering lessons and give them feedback on their instructor style, tailoring lesson plans and giving feedback on how it went, things that went well and things to improve on ahead of next week’s lessons.

“As RSM I also observe Cadets going for their SCIC (Senior Cadet Instructors’ Cadre) to prepare them to pass the course. Passing SCIC means the Cadets will achieve their 4 Star qualification” (the second highest award after Master Cadet).

“In the Regular Army the Regimental Sergeant Major is the most senior soldier in a Regiment or Battalion.

“In the Army Cadets it is the highest rank you can achieve and only one RSM is appointed by a Battalion.

“I was appointed Cadet RSM five days before I went to do my Master Cadet and as RSM I have to manage right across four companies of the Battalion, liaising with the Commandant, Deputy Commandants, the Cadet Executive Officer and the Adult RSM.

“My role is to be a link between the Cadets and the Adult Instructors, representing the views of Cadets and giving feedback to improve training. 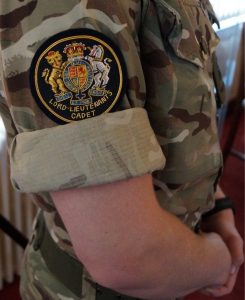 “My friends from school know I’m in the Army Cadets and they know I am doing quite well but they don’t really understand what it is that I do.

“My family really like it and my mum, day, two older sisters and my gran and papa are always asking what I’ve been up to, and what’s happening next.

“My dad is a physio and joined 602 Squadron RAF Reserves in Glasgow about three years ago and I wonder if my experience in the cadets influenced him to join the Reserves.”

Having completed secondary school, Cadet RSM Anderson plans to go on to study a BEng in Product Design Engineering at Strathclyde University from September before joining the Parachute Regiment as an Officer.

In the meantime, he plans to join 4PARA (the Parachute Regiment’s Reserve unit in Glasgow) where he believes the experience will help in passing the Selection Board for the Royal Military Academy Sandhurst.

“You can get into Sandhurst without going to university, but I think they prefer you to have a degree.

“I know that there will be tough competition to join the Paras as an Officer and I’m hoping that four years in the Army Reserve will help me to make a more realistic and make informed choice about future career as an officer in the Paras.

“Ideally I’d like to join the Pathfinders – they are the first ones into combat, they are a recce platoon for certain regiments, secure positions and recce enemy positions.

“Last August was a big month for me. I was promoted to Cadet RSM and was appointed Lord Lieutenant’s Cadet to the Lord Lieutenant for Ayrshire and Arran.

“The Lord Lieutenant is the representative of The Queen and I was honoured to be put forward, and to get it. A lot of thought went into the appointment from the Battalion’s senior officers.

“I am privileged to accompany the Lord Lieutenant and gain access and experience of high profile events that I otherwise wouldn’t get to attend. It is an important role and a big responsibility which not many people get to do. I feel very special to have been chosen. 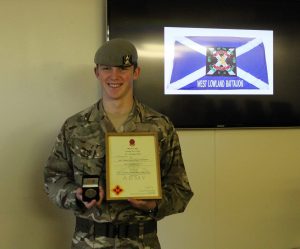 “Master Cadet focuses on leadership. I was in command of a “section” of 8 people and had a 2i/c” (second in command).

“It’s full-on! Over the whole week, right from arrival, you are being assessed in terms of leadership. I was the only one from our Battalion doing my Master Cadet that week.

“I enjoyed every aspect, from fieldcraft, setting up a harbour area, patrolling, and “command appointment” as a section commander.

“At the end of the week we carried out a platoon attack against Regulars from the Welsh Guards.

“The night before we made a model of the area and had a briefing at 0400 hours before carrying out a dawn attack.

“I’m pleased to say that, based on my performance over the week, I was the appointed the Platoon Commander and was in charge of all the Cadets for this final part of the course.

“Leading the Platoon attack was the highlight of the week for me. I was also awarded the Commandant’s Coin by the Commandant of Frimley Park – only four out of the 30 Cadets on the course were presented with a coin so I was glad to be at the top of the list.

“As part of the Master Cadet course we also got a tour of the Royal Military Academy Sandhurst, which was really interesting for me as I want to be an Army Officer in the future. We also got to see the Wellington Room, which has a massive painting of the Battle of Waterloo, and explore the ties to my cap badge” (the RSDG cap badge commemorates the capture of a Napoleonic Eagle by the Scots’ Greys).

“Barry Buddon will be my last Annual Camp as I age-out in August” (Army Cadets have to leave once they reach the age of 18).

“At Annual Camp I will effectively be the Commandant’s eyes and ears and I’m expecting to be pushed hard and given lots of responsibility for the administration, management and organisation of the 375 Cadets attending camp. 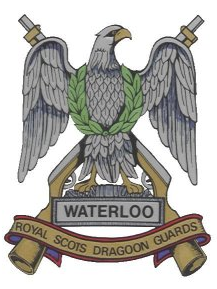 “In addition to leading the full Battalion at the opening and closing parades it’ll be up to me to take the temperature of the Cadets and report back to the Commandant and all the adult instructors at nightly management conferences.

“I will also be responsible for general standards and behaviour during the fortnight, and dealing with issues that arise.

“But before then, in addition to my Lord Lieutenant’s Cadet and RSM duties, I’m looking forward to taking part in a parade to mark the presentation of a new Standard for the RSDGs at Waterloo Barracks.

“The presentation of a new Standard is a once-in-a-career event. I’m very proud that I will be leading the RSDG Cadets on parade.”