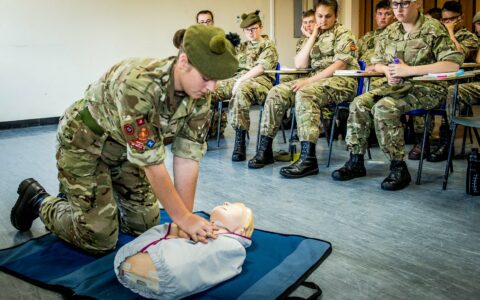 For many years, Cadets have been able to achieve a range of vocational qualifications such as Duke of Edinburgh’s Award, St John’s First Aid certificates alongside their Cadet Proficiency Syllabus.  Since 2013 we have been working closely with the Scottish Qualifications Authority (SQA) to develop a suite of recognised qualifications which formalises the learning and development young people achieve as members of the Cadet Organisations in Scotland, and equips them with qualifications that are recognised outside the Cadet Organisations. The achievement of SQA-recognised qualifications will enhance the education and employment prospects for Cadets, the vast majority of which pursue careers outside the Armed Forces. At present we have three SQA credit-rated awards available to cadets across Scotland:

The Leadership Award at SCQF level 5 is available to Cadets who are beginning to develop their skills as trainers and leaders of teams. It consists of two units:

The Leadership Award provides an excellent opportunity for cadets to gain a recognition for their own development and the support they provide to fellow cadets outwith the school environment.

The Army Cadet Achievement, Teamwork and Citizenship Award has been developed specifically to enhance the employability of young people across Scotland by showcasing their skills and learning to future employers. It has been credit rated by SQA, which also awards the qualification in partnership with Lowland RFCA. This means that the award is listed on a young person’s National Record of Achievement alongside their school and college qualifications.

It has been designed to reflect the 2 Star syllabus, and showcase this crucial learning to employers, colleges and universities. It sits at level 4 on the Scottish Credit and Qualifications Framework and is worth 20 credits.

Like the Army Cadet Award, the RAF Air Cadet Aviation Practice 1 is awarded and certificated by SQA in partnership with Lowland RFCA. It has been designed to match the learning carried out by cadets as they progress in the organisation – in this case, to the level of First Class Cadet.

This award is at level 5 on the Scottish Credit and Qualifications Framework, and is worth 4 credits. It covers topics such as basic navigation, airmanship and radio communications, and provides recognition for the hard work that RAF Air Cadets do in their spare time.

We continue to work closely with SQA to increase the number and choice of qualifications available to all three Cadet Organisations in Scotland. We are working on a suite of nine awards, two of which are already credit rated by SQA.  Currently, two more awards are in development and will be available to cadets in 2018: