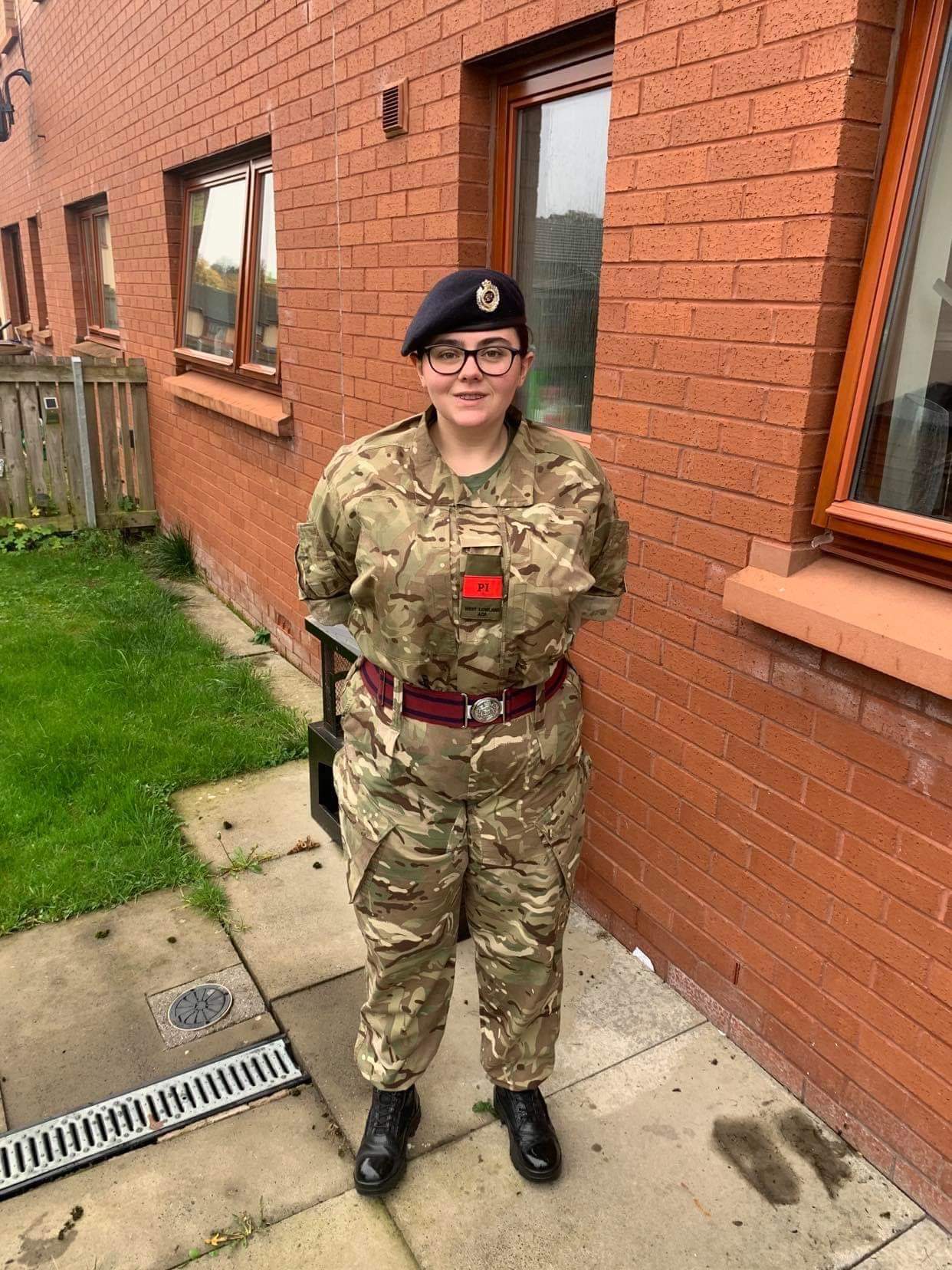 A Cadet Force Adult Volunteer has been hailed a hero after saving a woman’s life with the first aid skills she gained with the Army Cadet Force.

Caitlin Fitzsimmons was able to effectively support her partner’s mother, Mary-Ann Shankland, who went into an anaphylactic shock after digesting honeycomb-flavoured ice cream.

The pair were on a family holiday in Skegness when Mary-Ann’s full body flared up in hives before she fell in and out of consciousness several times.

Caitlin was able to quickly spot the signs of someone suffering from an anaphylactic shock, place them in the recovery position, phone an ambulance and keep herself and Mary-Ann calm in an extremely stressful situation – all thanks to the vital training she received in her three years as an Army Cadet with the Royal Engineers Detachment in Paisley.

The family had stopped for ice cream on 13 October 2020 where Mary-Ann had accidentally consumed honey of which she is severely allergic to.

Nine hours later Caitlin and Mary-Ann remained in the holiday home while the rest of the family visited the entertainment complex in the evening.

Caitlin recalled: “The boys booked to go out but I was sleeping so I decided to stay in and they asked me to keep an eye on Mary-Ann because she looked a bit red. When I woke up she was in hives – her full body including her limbs and her chest.

“She went for a shower to bring it down because she was really hot to the touch. Mary-Ann was really, really warm and when she came out the shower she fell flat unconscious on her face.

“I put her in the recovery position and phoned an ambulance straight away. I said to them I think it is anaphylaxis because she was showing all the signs. Her eyes were everywhere and her pupils were massive. She was dazed and didn’t know her name, where she was or what happened.”

“It was horrible for me to witness,” Caitlin continued. “But the third time she fell unconscious was definitely the worst. She asked for water again and I let her sip it but this time she was out cold, I couldn’t hear any breathing at all. So I put her on to her back and luckily as I tilted her head back that’s when she started breathing. Thankfully the paramedics soon turned up.”

Now an adult volunteer PI (Probationary Instructor) with the same detachment of West Lowland Battalion ACF, Caitlin was relieved she had taken on board what her then adult instructors in the Army Cadets had taught her.

“It wasn’t nice to witness but I was glad that I was there because I feel if I didn’t have the training I wouldn’t have known what to do and probably would have started flapping. I would have panicked!

“I was able to stay calm and when I couldn’t hear her breathing I was preparing for the worst which was to do CPR. Which, if I didn’t attend Cadets, I would never have known. Someone can describe it over the phone to you but you will never actually know how to do it properly unless you’ve done it before.”

Thankfully Mary-Ann recovered in the days after the ordeal and has since reiterated the importance of the life-saving skills Cadets learn – as Caitlin so brilliantly demonstrated.

She said: “Had Caitlin not done her first aid training who knows what would have happened to me. Maybe she would have panicked but she’s obviously been very confident in herself and in what she was doing because she had done the training for it. I am very proud of the young lady she is.

“I really can’t thank her enough. There is not enough words that I can say, thank you just doesn’t seem enough. I was really frightened that night. It was a really scary experience.”