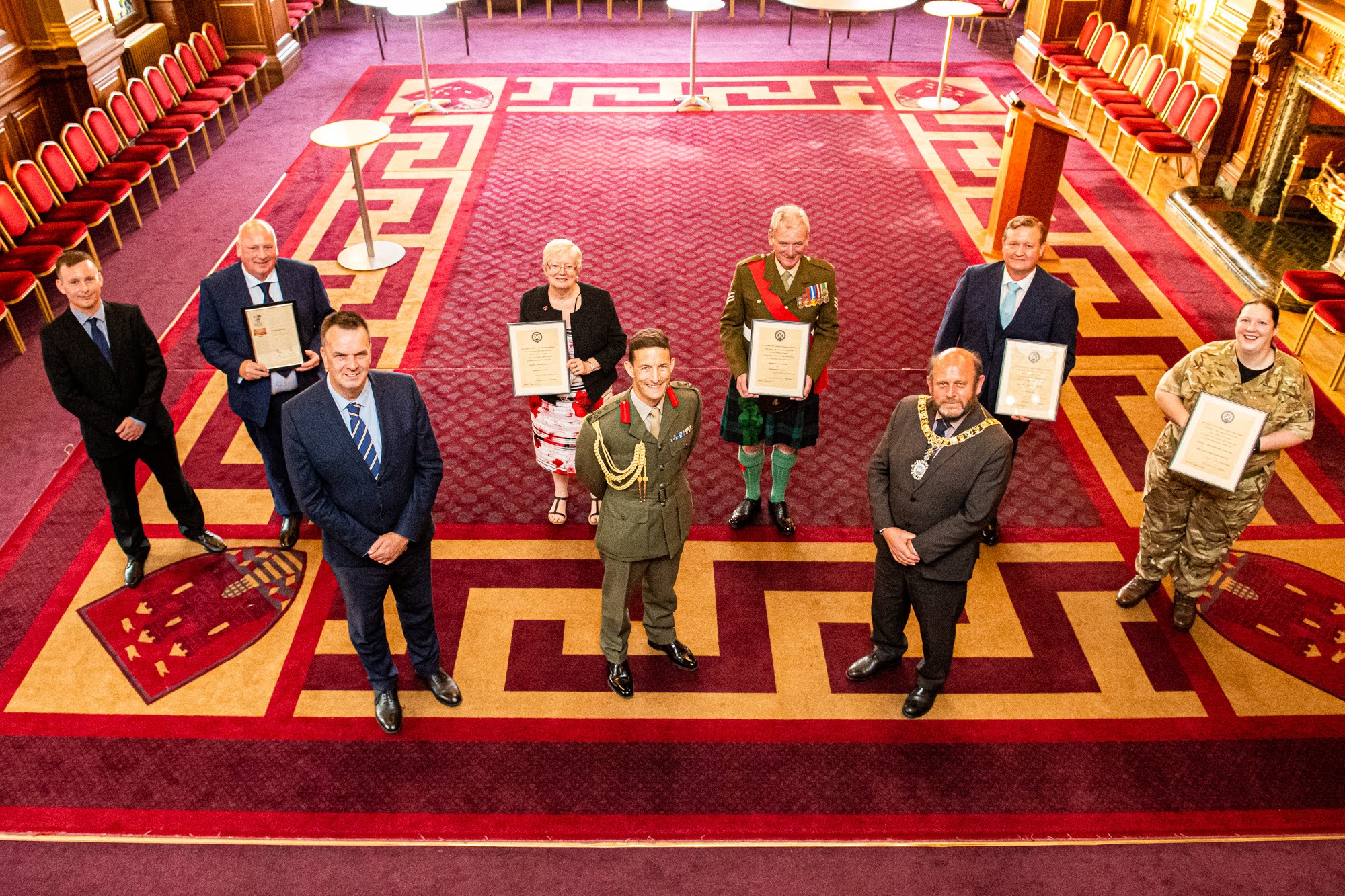 Cadet Force Adult Volunteers were honoured for their outstanding service by Her Majesty The Queen’s representative for the City of Edinburgh.

Six Adult Instructors from across the Army Cadet Force, Sea Cadets and Combined Cadet Force received a Lord Lieutenant’s Certificate of Meritorious Service for their contribution to Defence and society, through their commitment to their individual units and communities, at Edinburgh City Chambers on 2 September 2021.

The annual Lord-Lieutenants’ Awards for Reservists, Cadet Force Adult Volunteers, Cadets and employees of the Reserve Forces and Cadet Organisations are recognised as prestigious honours throughout the Ministry of Defence.

The Rt Hon Frank Ross Lord Lieutenant & Lord Provost of the City of Edinburgh signed and presented the certificates. One such recipient was Colour Sergeant John Meikle. 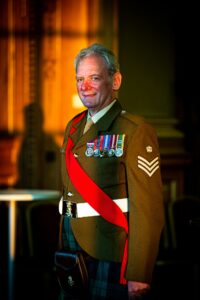 John has spent 34 years as a Cadet Force Adult Volunteer in a variety of capacities and joined the Combined Cadet Force Army section at The Edinburgh Academy in 2007.

Upon receiving his award, John said: ‘I feel extremely proud. I felt delighted but surprised to have been nominated, as I am only one part of the team at the Academy.

‘This achievement ranks above any honours I have previously received, as it recognises not only the work I have done but also the hard work and efforts the Cadets have put in.

‘What I enjoy most about volunteering in the Combined Cadet Force is helping the Cadets reach their full potential and watching them grow into young adults.

‘It is all about engaging with the Cadets, and teaching them life skills that will be useful in their later lives, no matter which career path they choose.’

Lieutenant Yasmin Shorter, of Lothian and Borders Battalion Army Cadet Force, was also formally recognised for her service.  A Cadet Force Adult Volunteer for nearly 11 years, Yasmin is now a Company Staff Officer in the Battalion and has strived to guide and mentor the Cadets in life skills that assist in their development within their community, particularly in the Granton area of Edinburgh.

She said: ‘It was an honour to have received the Lord-Lieutenant’s Certificate for Meritorious Service. I am overjoyed to have been nominated for the award let alone to receive it.

‘I feel both proud and humbled to be a recipient of this award and it fuels the passion I have to continue supporting and serving the young people through the Army Cadets.

‘Receiving multiple leadership awards and becoming a Chartered Manager have all been amazing achievements that I have gained in the past couple of years. But receiving this award recognising the dedication, commitment and passion that I have put into the Army Cadets over the past 11 years leaves me speechless and rather teary-eyed!

‘The highlight for me has been championing the Duke of Edinburgh Award across Edinburgh, the Lothians and the Borders. Helping so many young people take on new skills that set them up for life has given me that warm fuzzy feeling that you get from volunteering and helping others.

‘I enjoy inspiring young people to try new things and work on skills that help take them to the next level. Their small steps that may seem insignificant to them now is leading them on a path to greatness, being able to be even a tiny part of this process is amazing and I am honoured to be a part of it.’ 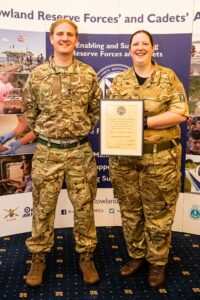 Lord-Lieutenant Frank Ross said: ‘Edinburgh is so proud of its Armed Forces community and boasts more than 800 Reservists and 700 Cadets. These certificates are the city’s way of celebrating the exceptional contribution these individuals make every single day. This year all the recipients are Cadet Force Adult Volunteers who have made a real difference to their units and their communities with the support of employers, friends and family.

‘It was fantastic to be able to present the certificates in person and congratulate each of them and thank them on behalf of the Capital.

‘Of course none of it would be possible without the enduring co-operation of employers who support and encourage their Reservists and Cadets to commit when duty calls and I call on others to follow suit if they can.’ 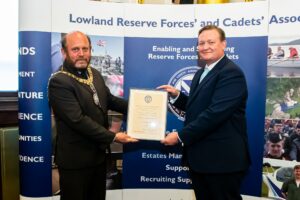 Nominations are made by the Commanding Officers and are reviewed by Lowland Reserve Forces’ & Cadets’ Association (RFCA) which make recommendations to the Lord-Lieutenant.

Captain Andrew Cowan, a Royal Naval Reserve Officer and Chairman of Lowland RFCA, said: ‘The Lord-Lieutenant’s Awards are an important way of celebrating the positive contribution the city’s Armed Forces community continues to make to the Defence of the nation, their communities and neighbourhoods.

‘The Cadet Force Adult Volunteers honoured with certificates exemplify the benefits service in the Cadet Organisations can bring and equip individuals with skills and experience that are useful life-skills and attractive to employers.

‘It is also an opportunity for us to recognise the commitment of employers who have signed the Armed Forces Covenant, including employers such as Menzies Aviation, which received an Employer Recognition Scheme Bronze Award from the Ministry of Defence for its backing for the Armed Forces community. 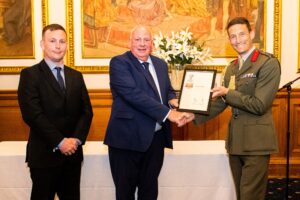 ‘We would like to pass on our thanks to the City of Edinburgh Council and the Lord Provost for hosting the Lord-Lieutenant’s Awards. And we thank them for the support that Edinburgh gives to its citizens who serve in the Reserves and Cadet Organisations and the advice and support the city gives to service Veterans.’

More photographs are available on request.