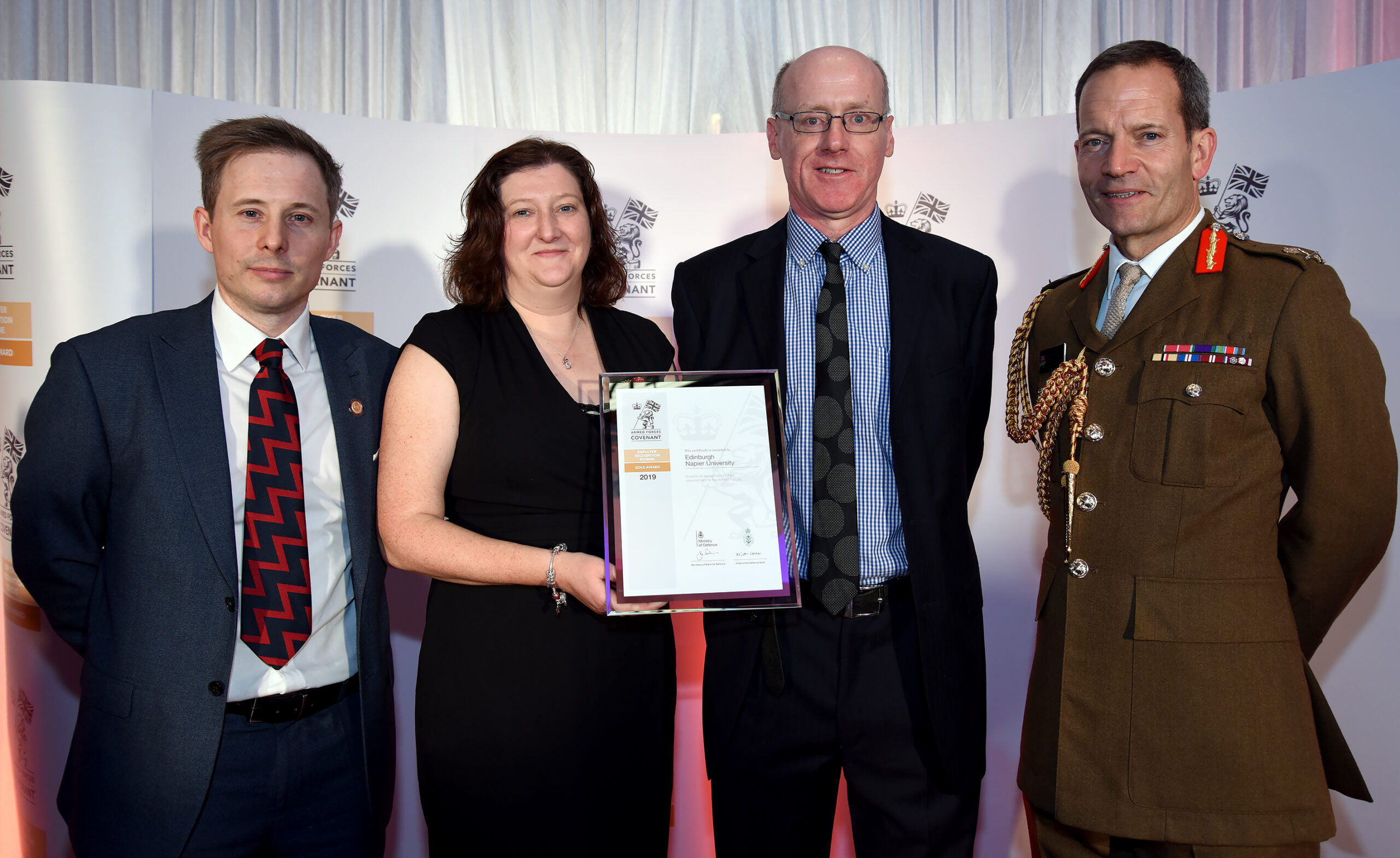 A Scottish university has welcomed the country’s first Centre for Military Research, Education and Public Engagement to its campus.

Edinburgh Napier, a Gold Employer Recognition Scheme (ERS) Award holder, will see the centre build on the wide-ranging education and support the university offers and provide Armed Forces personnel with a community hub.

It was the first Scottish university to receive the Gold ERS award in 2019 by the Ministry of Defence for its commitment to the Armed Forces community, including Reservists, ex-service personnel and their families. Its year-round activities help promote the skills and experience that a military career, at all levels, can bring to potential employers.

Edinburgh Napier is also actively involved with two international military networks focussed on research into education, wellbeing and military HR. It has identified even more opportunity to share knowledge around widening education opportunities for service members and veterans.

Furthermore, researchers at the institution have been pivotal in describing a new condition called Complex Post-Traumatic Stress Disorder (CPTSD) that can affect military personnel.

Claire Biggar, university lead for military public engagement, said: ‘It’s crucial for us as an establishment to acknowledge the contribution Armed Forces make to our community. Over the years, we’ve worked alongside veterans and ex-service personnel to offer more educational opportunities for those coming out of the Armed Forces. The new centre offers an extension to our already existing services and has been driven by the pivotal research being done throughout the university.

‘We hope our centre provides those within the Armed Forces with a central hub where they feel supported in whatever their next career aspirations are.’

The centre, being launched at the university’s Craiglockhart campus, taps into Edinburgh Napier’s rich military past as Craiglockhart was a hospital for officers during the First World War. It was there that the meeting of Wilfred Owen and Siegfried Sassoon took place, inspiring some of their most renowned poetry. The extensive War Poets Collection is now hosted at Craiglockhart.

Dr Gerri Matthews-Smith, university military research lead and centre director, said: ‘Thanks to the historical significance of the Craiglockhart campus, and the work done supporting Armed Forces education and research, Edinburgh Napier has always had strong links to the Armed Forces. The opening of this new centre demonstrates Edinburgh Napier’s commitment to the future of the Armed Forces and cements the foundations of our future activity supporting ex-military personnel in their transition to civilian life.

‘We are currently working on a variety of projects including Military Transition in Scotland, and working alongside the Association of Directors of Education in Scotland (ADES) National Transitions Officer for Children and Young People of Armed Forces Families in Scottish Schools, which supports the wider network and their families. This comes following years of engagement with local schools, like Colinton Primary, to highlight to children of military families that they can aspire to a university education. This new centre will be essential in allowing us to continue working on research that benefits the military community.’

Keith Brown MSP, Cabinet Secretary for Justice and Veterans, said: ‘The Scottish Government is wholehearted in our commitment to supporting our Armed Forces, veterans and their families in Scotland. These communities are an integral part of society with a considerable contribution to make.

‘The launch of Napier University’s new Centre for Military Research, Education and Public Engagement is exactly the sort of innovative project which supports our wider commitment to make Scotland a destination of choice for veterans and their families.’