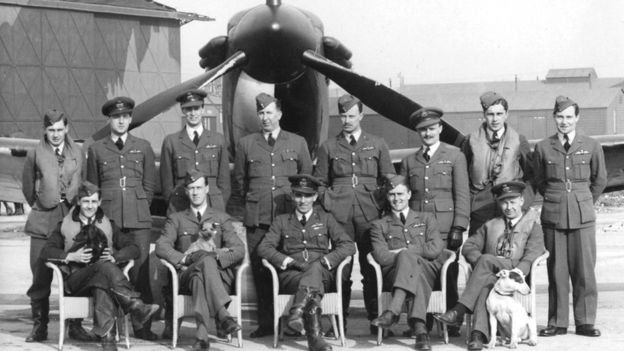 As part of the celebrations to mark VE Day 75 (75 years since Victory in Europe) Lowland RFCA spoke to personnel from Reserve Forces in the Lowlands of Scotland about VE Day and the units’ involvement during World War II.

Warrant Officer John Webster, an Air and Space Operations Manager with 602 (City of Glasgow) Squadron, of the Royal Auxiliary Air Force (RAUXAF), told the story of the unit’s war effort and how it became the first Auxiliary Squadron to receive the Spitfire aircraft at the outbreak the war.

WO Webster, the oldest serving part-time volunteer Reservist with the squadron, said: “One of our pilots shot down the first German aircraft which crash-landed near the village of Humbie in East Lothian in October 1939.

“We moved to the South Coast to take part in the Battle of Britain and continued to fly from various airfields, mostly in the south protecting UK airspace against invading German aircraft until the Normandy campaign when we followed the ground troops into France to provide close air support as they re-took Europe.”

VE Day marks the Victory in Europe 8 May 1945 when the Allied Forces announced the surrender of Germany in Europe. After six years of war and millions of lives lost it was a huge relief to the people of our country and gave them hope for the future.

WO Webster reiterated the importance of remembering the sacrifices made by all the people in the  country.

He continued: “Whether it was a sacrifice in how they lived their lives during the war years or in giving their lives in the service of their country, we should remember that and celebrate that it culminated in victory.

“It puts into perspective what we are going through now as a country as we battle a different kind of enemy in the form of the Coronavirus.”

A History of 602 Squadron RAUXAF During WWII

No 602 (City of Glasgow) Squadron was the very first of the Auxiliary Air Force Squadrons to be formed in September 1925. Originally formed as a light bomber squadron, it employed Auxiliary pilots and ground crew on a part-time basis.

As war was declared and hostilities broke out, 602 Squadron was posted to Drem on the east coast of Scotland and was tasked with protecting His Majesty’s ships in the Firth of Forth. Later that month, on 28 October 1939, Flight Lieutenant Archie McKellar was credited with shooting down the first Luftwaffe aircraft of WWII over British soil, a Heinkel HE-111. The Heinkel was seriously damaged by machine gun fire and crashed at the village of Humbie, East Lothian.

On 13 August 1940, a month into the Battle of Britain, 602 Squadron was posted to Westhampnett in the Tangmere Sector West Sussex to relieve No 145 Squadron which had taken heavy losses in the previous weeks.  On arrival, the 602 Squadron pilots could see a heavy German Air Raid in progress on RAF Tangmere, the Sector HQ, leaving many of the buildings and much of the airfield damaged. The day was named Adlertag by the Germans as part of a military operation by the Luftwaffe to destroy the Royal Air Force.

The outstanding bravery and skill of the 602 Squadron pilots meant that the Squadron stayed at Westhampnett for the remainder of the Battle of Britain and beyond, losing just five pilots to the enemy and with one of the highest numbers of enemy aircraft shot down during the Battle.

602 Squadron continued to defend the Channel and the North Sea from bases in Surrey, Cornwall, Hampshire, Essex West Sussex and Kent and was one of the squadrons to support the Dieppe raid in 1942 from RAF Biggin Hill.

The squadron was based at RAF Ford in West Sussex as part of the 2nd Tactical Air Force, when it took part in Operation Overlord in June 1944. It launched the successful invasion of German-occupied Western Europe via the Normandy beaches.

As the Operation continued, 602 Squadron followed the ground troops to provide close air support and ensure air superiority as they moved forward into France and beyond. The squadron moved first to Longues Sur Mer in France and, like many of the squadrons in support of the ground troops, operated from temporary Advance Airfields in France and Belgium. During this time squadron leader Johannes Le Roux, the Commanding Officer of 602 Squadron, was credited with attacking and seriously injuring General Erwin Rommel in his staff car on a road outside Sainte Foy de Montgomerie in Normandy. Strafing the vehicle, the driver lost control, struck a tree and spun off the road. Rommel was thrown from the vehicle fracturing his skull. Le Roux had single-handedly removed Germany’s commanding general from the Normandy battlefield. He was just 24 years old and was himself killed two months later.

In September 1944, the squadron returned to the UK and RAF Coltishall from where it carried out the daring raids against German V2 rocket sites located in the Netherlands, including a precision low level bombing of the Hague 18 March 1945 by Flight Lieutenant Raymond Baxter.

Though the squadron had been located elsewhere in Norfolk over the preceding months, it was back at RAF Coltishall when Victory in Europe was declared in May 1945 and, like all the other Auxiliary Squadrons, it was disbanded at RAF Coltishall on 15 May 1945.