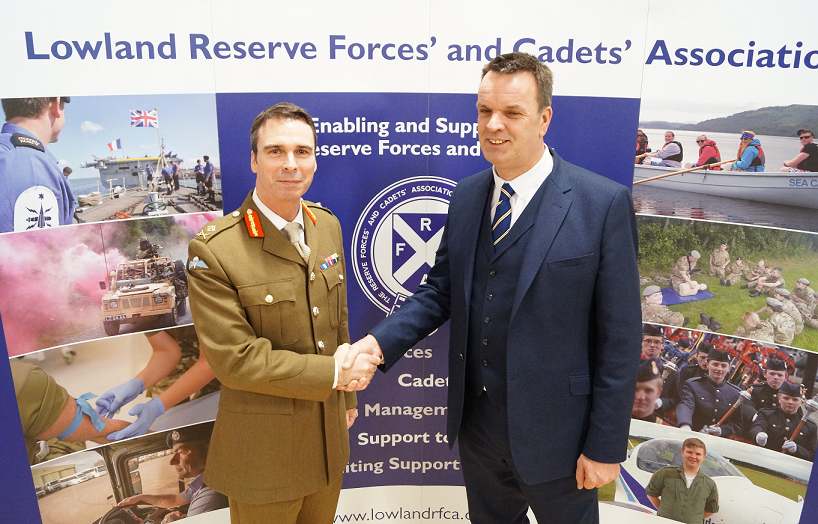 The organisation which promotes reserves and cadets has appointed a Glasgow-based Navy reservist as its new chairman.

Andrew Cowan – a Captain in the Royal Naval Reserve, and former Commanding Officer of HMS Dalriada in Glasgow – was appointed chairman of Lowland Reserve Forces’ and Cadets’ Association at their 2018 Annual General Meeting in Glasgow.

A lawyer by training, Captain Cowan is managing partner and head of litigation at leading firm TC Young. In a career spanning more than 25 years he is recognised as a leading legal specialist in the housing sector.

Commenting on his appointment, Andrew Cowan said: “I’m very honoured to have the opportunity to chair Lowland RFCA. Having served on the board I know it is a highly effective organisation which does vital work in supporting our reserve forces and cadets across the three armed forces. Lowland RFCA has developed strong links with employers of reservists and is working in partnership with a growing number of top employers which have signalled their commitment to supporting our Reserve Forces by signing the Armed Forces Covenant.

“As a reservist I’ve had the opportunity to develop skills and take part in training exercises which I’d never have got to do in my civilian career as a lawyer. I want more people to have the same opportunities that I’ve had. That’s why my key priorities will be to support reserve units to recruit reservists in line with operational targets, and to support the cadet organisations as a valuable voluntary youth movement especially to increase in-school cadet opportunities for secondary school pupils and to drive through efforts to link their cadet proficiency qualifications to Scottish Qualifications Authority awards.

“I’m delighted to be working with a strong staff team at Lowland RFCA and would like to thank my predecessor Colonel Allan Lapsley, for his invaluable contribution to the organisation over recent years.”

Major General Munro, Assistant Chief of the Defence Staff (Reserves and Cadets) added: “I congratulate Andrew on his appointment as chairman of Lowland RFCA. As a fellow Reservist and solicitor I know that Andrew’s experience as a Royal Naval Reserve officer, combined with a distinguished career in the Scottish legal profession, means that he has a strong understanding of how Lowland RFCA can most effectively support and enable the Reserves and the cadet organisations across the region.  It is a thoroughly-deserved appointment and I look forward to working with him in his new role.”