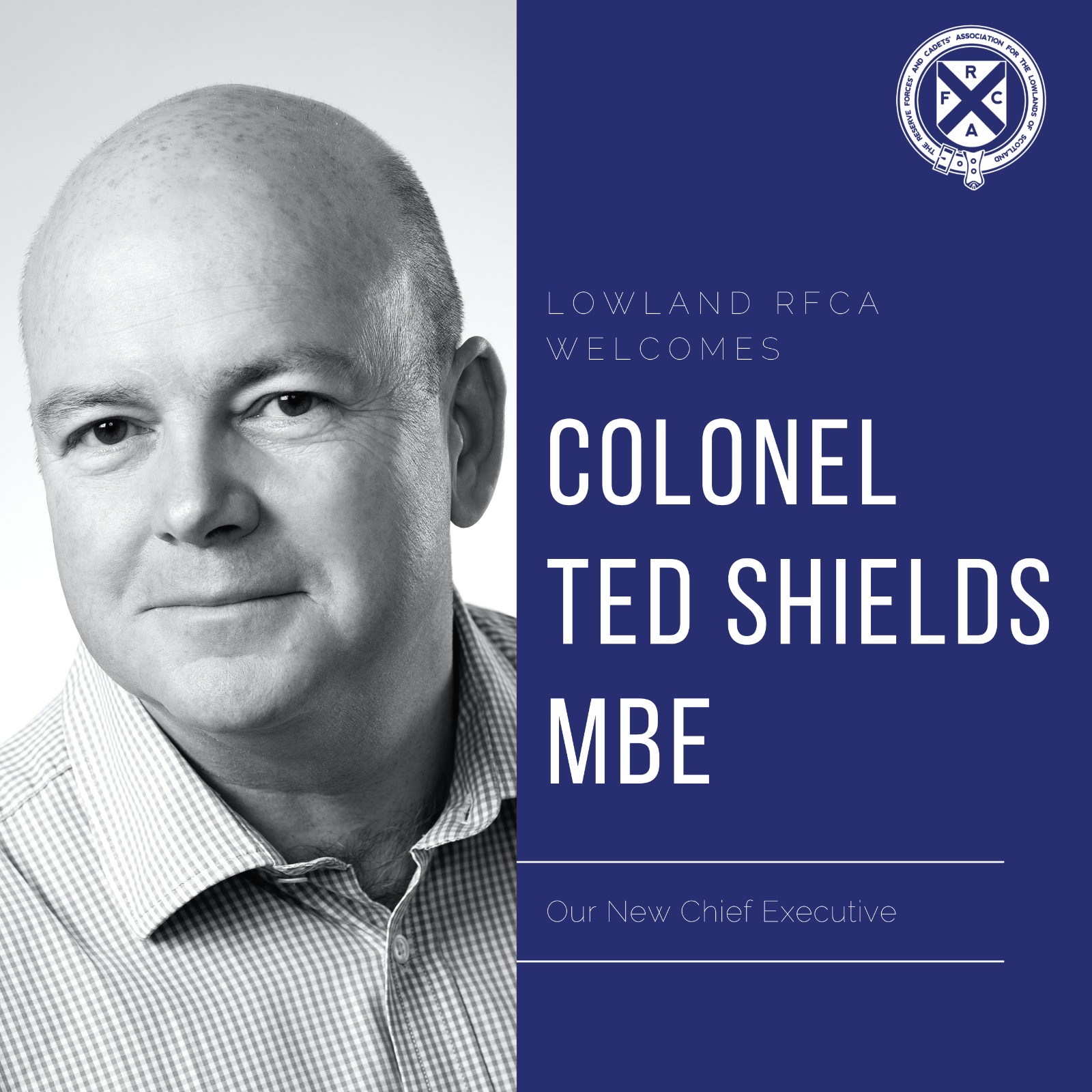 Lowland Reserve Forces’ and Cadets’ Association is pleased to announce the appointment of Colonel Ted Shields MBE as its new Chief Executive.

Colonel Shields took up the post on 15 May 2020 and replaces Colonel Robbie Gibson OBE who has retired following 15 years at Lowland House.

Joining the organisation after a full career in the British Army, Colonel Shields’ service included a variety of roles in both Glasgow and Edinburgh.

Colonel Shields said: “I am delighted to have taken over as Chief Executive of the Lowland Reserve Forces’ and Cadets’ Association.

“Lowland’s daily business covers a broad spectrum of activity and Colonel Gibson has worked tirelessly to not only deliver all that that entails but also to develop exciting initiatives. His shoes will be hard to fill.

“The Association is of the Lowlands with strong links to and relationships with our communities, businesses and local government.  We will continue – as best as we are able at this time – to do all that we can to build on those relationships and to support those who serve in the Reserve Forces and in the Cadets.

“It is now nine weeks since Scotland ‘locked down’. The staff at Lowland House have all risen to the many challenges that this pandemic has presented, responding with great flexibility and professionalism. I look forward to working with them going forward.”

Prior to moving to Lowland House, Colonel Gibson had already contributed a great deal to the Reserves. This contribution included serving as the Commanding Officer of 71 Engineer Regiment (RAF Leuchars) and working at the Army Personnel Centre in Glasgow as the Colonel of the Territorial Army and Reserves Division, overseeing the mobilisation of Reserves for the Gulf War in 2003. Colonel Gibson was awarded the OBE in 2015 for his outstanding contribution to the Armed Services.

Chairman of Lowland Reserve Forces’ and Cadets’ Association, Captain Andrew Cowan RNR, said: “I want to express an enormous vote of thanks on behalf of all at Lowlands. Robbie has served the organisation outstandingly and furthered its goals wholeheartedly.

“The way in which Robbie has passionately and efficiently run Lowland Reserve Forces’ and Cadets’ Association has earned him the respect of both uniformed commanders and community leaders. On behalf of the Board and Membership of Lowland RFCA  I wish Robbie and his family all the very best for the future.

“As we bid Robbie farewell, I wish to congratulate Ted Shields on his appointment.”