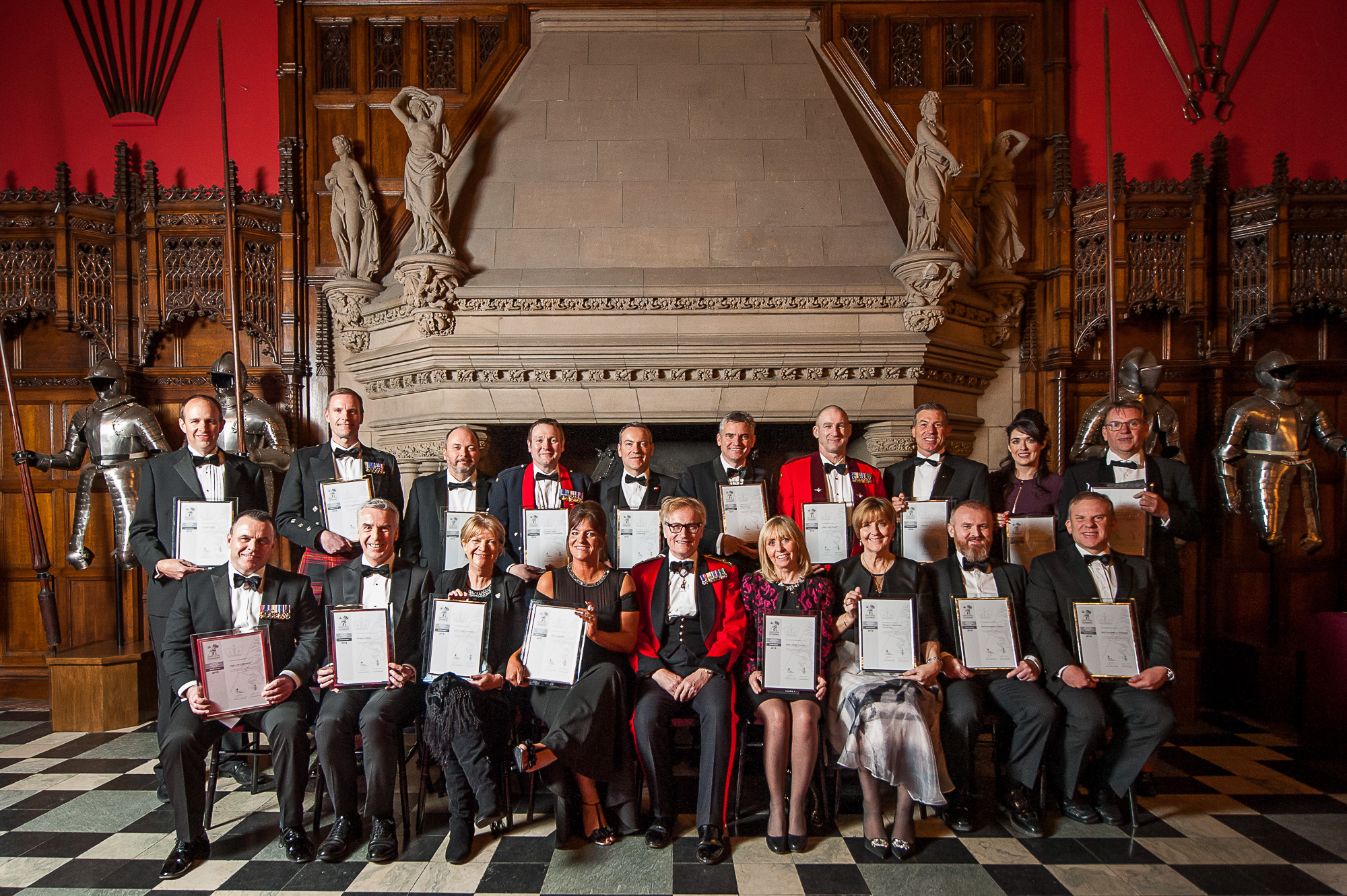 Eleven Scottish employers received a top award from the Ministry of Defence for their outstanding support for the Armed Forces.

The following companies and organisations were presented with the Employer Recognition Scheme (ERS) Silver Award at a black-tie dinner in the Great Hall of Edinburgh Castle 14th November 2019:

The prestigious accolade is the second-highest badge of honour available to organisations that employ and support Reservists, service leavers, Veterans and their families. 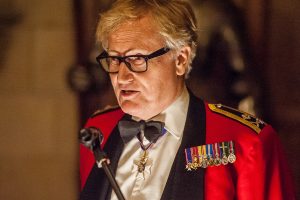 Guests were welcomed to the Great Hall by Lieutenant Colonel Hugo Clark, the Commander of Edinburgh Garrison before each employer received their ERS Silver award from Major General Simon Brooks-Ward, CVO, OBE, TD, VR, Assistant Chief of the Defence Staff (Reserves and Cadets) – the most senior Armed Forces Reservist in the UK.

Those in attendance also enjoyed a performance from the George Heriot’s Pipe Band and the Royal Marines Band and were given an insight into how fellow employers supported their Reservists, and the business benefits of part-time military personnel, through a number of speeches during the evening.

The audience heard from Flying Officer Ashley Brooks of 1756 (Broxburn) Squadron on his role as an Adult Volunteer with the RAF Air Cadets before Major Scott Menzies, a Reservist with 6 SCOTS and a pilot with Loganair, spoke about his dual role as a Reservist and an employee.

To view all images from the Silver ERS Award Ceremony click here.

Employers have gone above and beyond with their support through engaging with initiatives such as employing veterans, supporting individuals transitioning out of the Armed Forces into a new career and providing flexibility for Reservists. 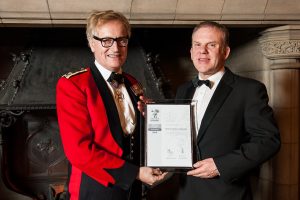 NHS Dumfries & Galloway employs military Reservists and Veterans, supports a number of events such as Armed Forces Day and has revised its HR policies to better support staff who volunteer with the Armed Forces Reserves.

“It is a great honour to be officially recognised as an employer who goes above and beyond to support Defence and to be given the second highest award by the Ministry of Defence.

“As an organisation which already employs a number of Armed Forces Veterans as well as active Reservists, we are determined to continue to build on that relationship.” 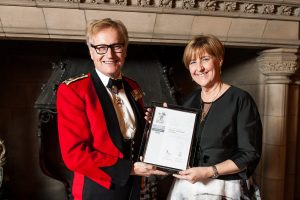 Glasgow Caledonian University (GCU) recognises the transferable skills of those leaving the Armed Forces and welcomes them to its workforce and student communities. The university also provides additional paid leave for Reservists and actively supports the work of the University Service Units.

Deputy Vice-Chancellor Academic at GCU, Professor Valerie Webster, said: “We are delighted to receive an Employer Recognition Scheme Silver Award in recognition of our outstanding support of veterans and their families, particularly during what can be a challenging time as they transition from service into a civilian life, seeking opportunities for further study or employment.

“Glasgow Caledonian University is a leading University in widening participation, recognised for its achievements in widening access to higher education and in supporting students to succeed. We look forward to welcoming more Veterans and their families to join the GCU community.” 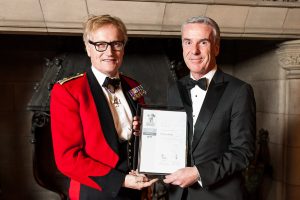 In 2018 the firm also set up an Armed Forces Network and employees recently took part in Insight Days organised by local military units, participating in tasks to develop leadership and teamwork skills. Members of the Network further run a number of charity fundraising events throughout the year.

John McGuigan, Customer Director and Executive Sponsor of the Armed Forces Network at Phoenix Group, said: “We’re delighted to have achieved the Silver Award for the Defence Employer Recognition Scheme and it is testament to our people that we have achieved this.

“At Phoenix Group we see first-hand the valuable skills that Armed Forces Veterans and Reservists contribute to our business and our community. We are aware of the additional support that Reserves and their families may need, and believe we have one of the best Reservist policies in the industry.” 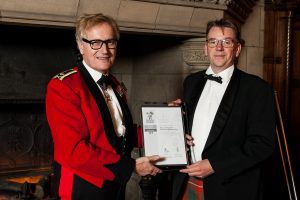 Edward Bruce, Chief Executive of Bruce Stevenson said: “Bruce Stevenson’s ambition is to become the ‘broker of choice’ to the Armed Forces community.

“We are proud to support our staff who volunteer with the Armed Forces Reserves, and recognise the benefits they bring back from their military training – skills and experiences that are deeply coveted in the business world.

“Having achieved a Silver ERS award we hope we can inspire other companies to sign the Armed Forces Covenant and we are already developing new initiatives with the intention of achieving a Gold ERS award.”

Airdrie decorating company, Bell Group, provides flexible work packages for all staff including those that are part of the Armed Forces. All staff are supported during deployment and the company supports charities including the Royal Naval Benevolent Trust (RNBT) and the Royal British Legion. 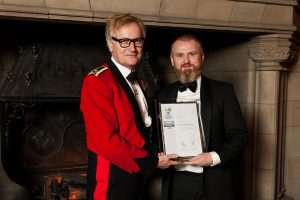 Bell Group CEO, Craig Bell, said: “Bell Group continues to have a strong partnership with the Armed Forces and are proud to have redecorated, maintained and refurbished accommodation, service and support buildings for the Armed Forces for over 20 years. We believe this is an important part of our business activity.

“As a family owned business we believe in, and invest in, our employees. We provide flexibility to many staff serving with the Armed Forces, support them during deployment and actively recruit from service leavers who, we know from experience, have the skill and attitude we seek as an employer.

“Bell Group is very proud to have been awarded the Ministry of Defence’s ERS Silver Award, one of the highest accolades for supporting the Armed Forces community.” 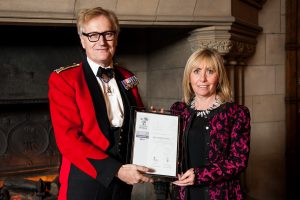 East Lothian Council has proactively raised awareness of the service community needs by working with its health, education, housing and voluntary sector partners.

The local authority has updated its Reservist policy, recognised service in its housing allocations policy and developed new housing for Veterans in the town of Cockenzie.

East Lothian Council’s Armed Forces Champion, Councillor Jim Goodfellow, said: “We are delighted to have received a Silver Employer Recognition Scheme Award. This is the second-highest award given by the Ministry of Defence to employers who go above and beyond to support the armed services community and acknowledges the work that we and our partners have undertaken in our area.” 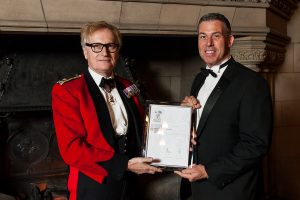 Half of the workforce at Musselburgh-based security training specialists, CAMOR, is made up of Reservists and Veterans and the employer is committed to offering discounts for training to the MOD.

Paul McDonald, CEO of CAMOR, said: “CAMOR are delighted and honoured to be recognised with such a prestigious award as a company supporting the Armed Forces.

“As a company we are humbled by the dedication that members of the Armed Forces display on a daily basis, and by committing our continued support to both current Reservists and Veterans is our way of showing our gratitude.”

John Johnstone, Managing Director at BD Print, is proud the Rutherglen company has been recognised for its commitment to supporting military personnel and will continue to align its values with the Armed Forces Covenant.

He said: “Over the last 18 months we have been active in advocating the benefits of the ERS to fellow businesses through our customers and suppliers. We are also now looking to expand our team with the recruitment of apprentices and senior staff members and will be encouraging current and former members of the Armed Forces to get in touch.

“We are delighted our hard work has paid off and are pleased to be announced as Silver ERS winners in 2019.” 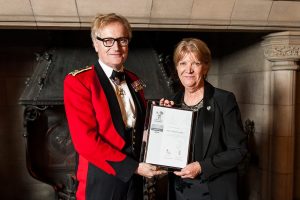 Prof. Gillian Hogg, Deputy Principal (Staff Development & Engagement) at Heriot Watt University said: “We are delighted to get this prestigious silver award which recognises that our community at HWU welcomes and supports veterans, reservists and their families. This accolade is important as it aligns so closely with our values and our desire to be an inclusive University where all staff and students feel they belong.” 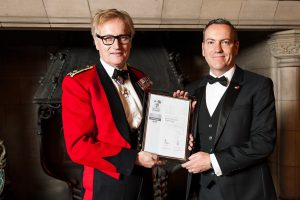 Forrest Precision Engineering actively seeks to employ Reservists and Veterans. Managing Director Scott Forrest said: “We are proud to receive such a prestigious award. We encourage all forces-friendly employers to partner with Defence by signing the Armed Forces Covenant.

“We will continue to advocate the benefits of signing the Covenant and will strive to achieve the Gold Award.”

Colin Vooght, Head of Engagement at Lowland Reserve Forces’ and Cadets’ Association (RFCA), the organisation which manages relationships between employers and defence in Scotland, said: “The award ceremony at Edinburgh Castle was a fantastic showcase of the successful partnerships between employers, Reservists, Cadet Adult Volunteers and the wider Armed Forces community.

“I congratulate the wide variety of different organisations who received a Silver Award this year. With Reservists making up an ever growing contribution to protecting the UK’s interests at home and abroad it is even more important that we have buy-in from employers, without whose support we wouldn’t be able to do what we do.

“I am delighted that these employers have been recognised with one of the Ministry of Defence’s highest awards and look forward to continuing to work alongside each of the award winners in the future.” 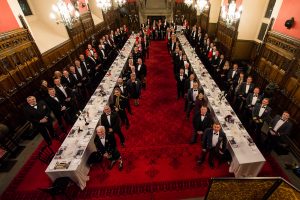