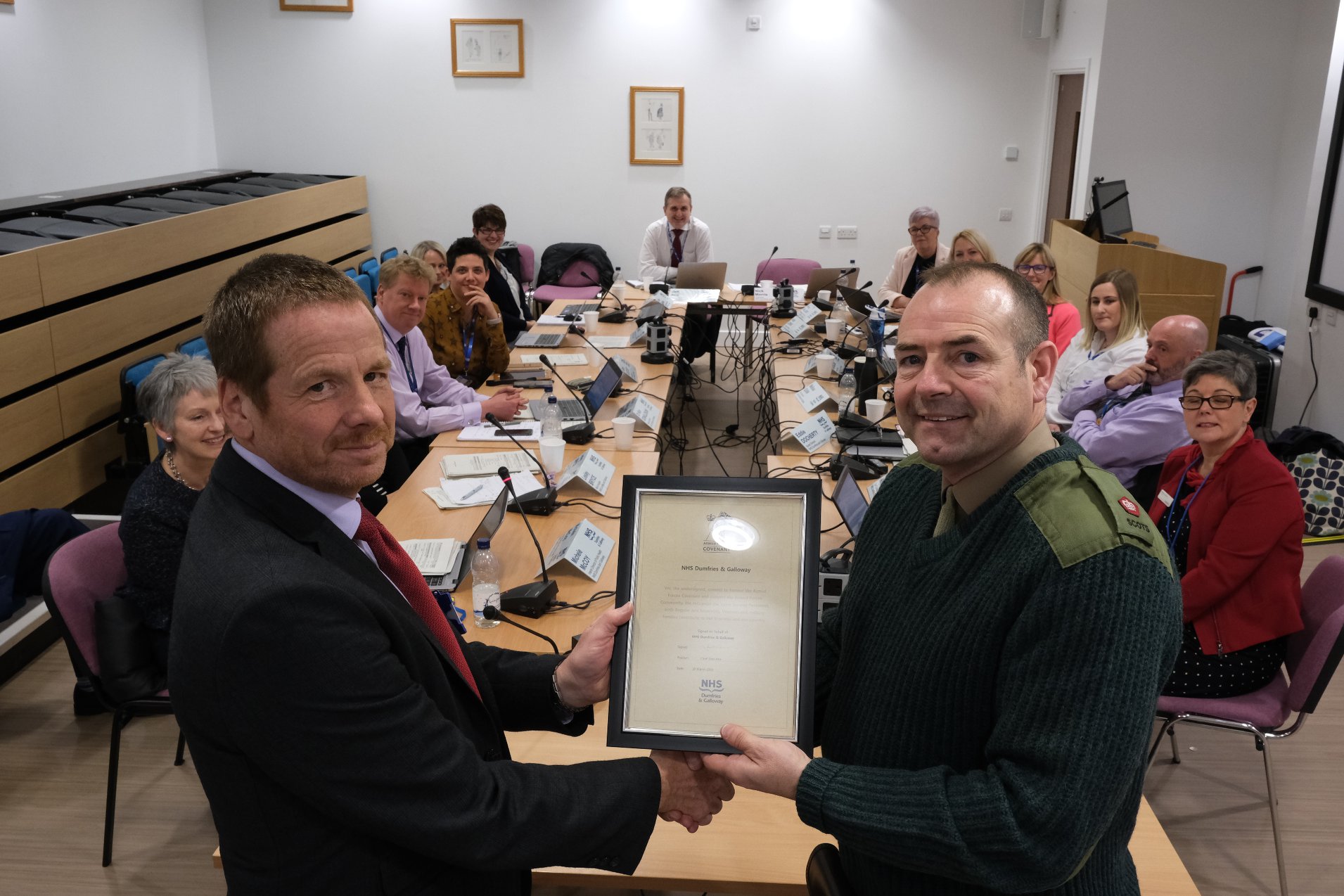 A commitment to supporting the Armed Forces has been undertaken by NHS Dumfries and Galloway.

The organisation has signed the Armed Forces Covenant as part of the first steps towards formalising its support.

Senior Armed Forces representatives, including Officer Commanding (OC) Bob Stewart of 6th Battalion The Royal Regiment of Scotland B Company and Charlie Cook of Lowland RFCA, attended a meeting of the NHS Board at Dumfries and Galloway Royal Infirmary to present the signed Covenant which officially marks the new relationship on 8 April 2019.

“NHS Dumfries and Galloway is fully committed to working in support of the Armed Forces and this represents an important step in formalising that relationship.

“Going forward, we intend to work towards achieving the initial Defence Employer Recognition Scheme (ERS) award which recognises employers who have provided exceptional support to the Armed Forces community and Defence by going above and beyond their Covenant pledges.

“This scheme encompasses Bronze, Silver and Gold awards for organisations which pledge, demonstrate or advocate support to Defence and the Armed Forces community.

“As an organisation which already employs a number of Armed Forces veterans as well as active Reservists, we are determined to build on that relationship and go beyond the commitment already established with the Covenant.”

The ERS is a three-tiered Bronze, Silver and Gold award scheme which recognises the different levels of commitment provided by employers. The Ministry of Defence thanks and honours those organisations for their support.

Employers have previously won awards for initiatives such as employing veterans, supporting individuals transitioning out of the Armed Forces into a new career and providing flexibility for Reservists.

Charlie Cook, one of two Regional Employer Engagement Directors at Lowland RFCA, said: “We are delighted that NHS Dumfries and Galloway has become the latest employer to show its support for the Armed Forces by signing the Armed Forces Covenant.

“The Armed Forces and the health service have always enjoyed a close working relationship. Pioneering clinical techniques in emergency medicine and trauma developed and perfected on the battlefield have been adopted by the NHS. Many NHS staff volunteer as Reservists within medical and infantry units, developing command, leadership and management skills which are useful in their civilian careers.