You are here: Home > Public News > Police Scotland’s Personal Protection Officers – A Day In The Life Of A Defence Secretary
◄Back to News 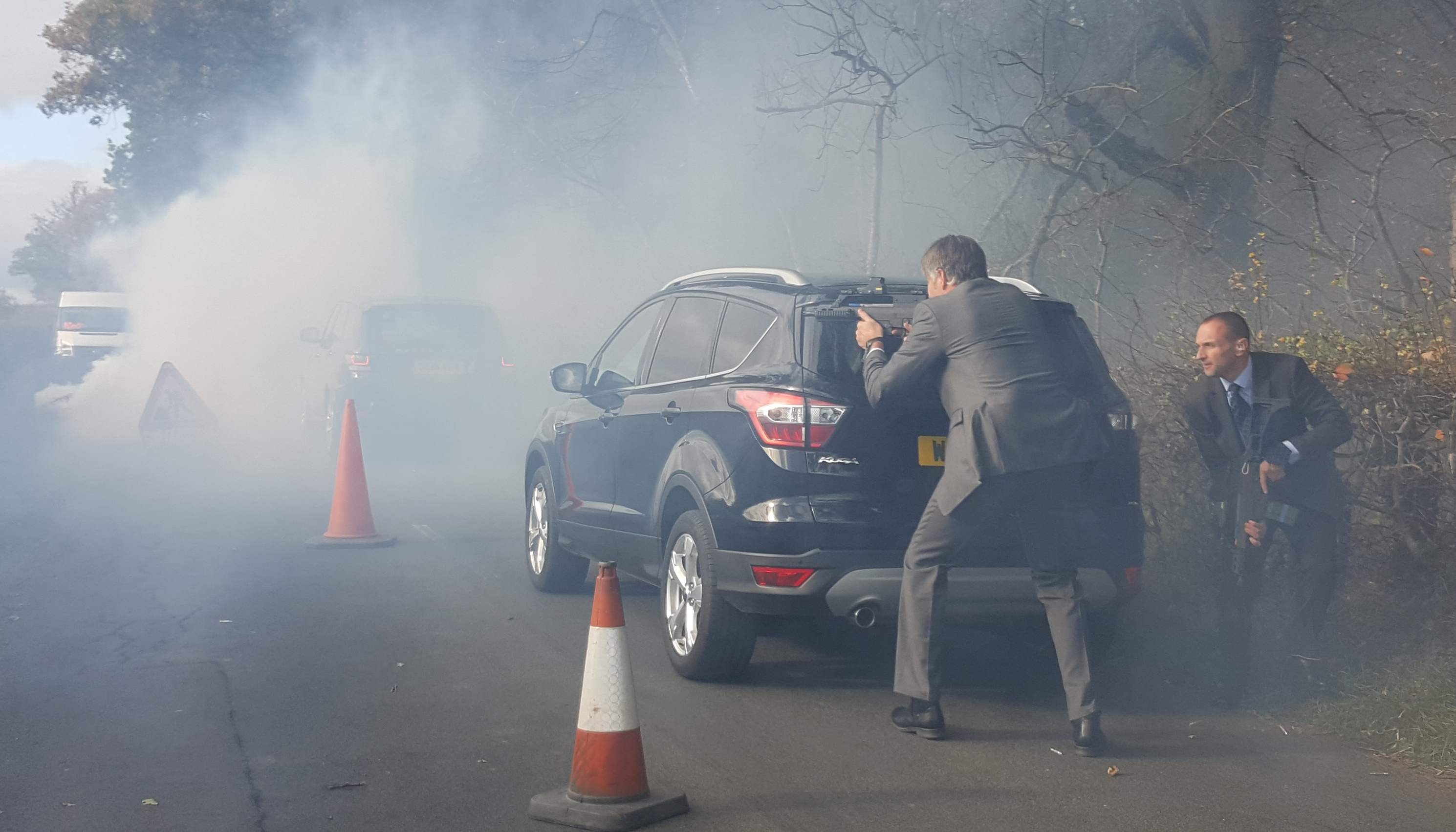 Throughout the UK there are individuals who, due to their rank or profile, require varying degrees of Police protection. Highly-trained and exceedingly thoughtful, the officers assigned to this role have to undertake the rigorous National Protection Officers Course. With many Protection Officers coming from the Armed Forces, Kate Johnston (Lowland RFCA’s Head of Communications) was invited by Police Scotland to take part in a live training event. Playing the part of Defence Secretary, Kate got to witness the trainee Protection Officers in action, demonstrating their people, protection and planning skills.

In 2018, the BBC drama, The Bodyguard, hit our screens to much acclaim and enjoyment. The television series told the story of Julia Montague (Keeley Hawes), the newly appointed Home Secretary, and Police Sergeant David Budd (Richard Madden), her newly assigned Protection Officer. Like many others, I rather enjoyed the programme, having never really thought much about those who protect our nation’s Royal Family, dignitaries and VIPS. So when I was invited to spend the day with our friends at Police Scotland for a training event, I was beyond excited.

At various points throughout the year, Police Scotland run the National Protection Officers Course. Expertly guided by experienced Protection Officers, the already highly-qualified trainees spend five weeks at the Scottish Police College, being put through their paces with demanding training and simulated exercises. I had been asked to play the part of the ‘principal’, meaning I would spend the day pretending to be the Defence Secretary, allowing the trainee Protection Officers to put their training into practice.

As the newly appointed Defence Secretary (a worrying thought for the country, I’m sure), I was assigned a package of protection which included six suitably equipped Protection Officers and three vehicles: the advance vehicle, the principal’s vehicle, and the backup vehicle. Additionally, Sergeant Jim (course director) played my PA for the day, keeping me right and allowing him to assess his trainees.

Jim, a long serving Protection Officer and ex-32 Signal Regiment (British Army) Reservist, informed me that throughout the day he would text me challenges which I was to give the team to keep them on their toes. We disembarked the train at Stirling station, where we were met by the first Protection Officer. Escorted to the cars parked right outside the station entrance, the car doors were opened and I was ushered in. To give each trainee a shot, they rotated through the various team roles throughout the day, giving me five different Personal Protection Officers (PPOs). Claire, the first to go, gave me a security briefing as we departed to our first location. Windows were to be kept shut, doors were to be opened by her unless otherwise requested and should there be an incident, I was to listen to her voice only and follow her exact instructions.

To mimic the sort of day a Royal Family member or dignitary might have, a full list of visits had been scheduled. With six stop-offs planned, a train journey and a lunch date to keep, the trainees had planned the day with military precision and carried out a recce the day before. Whilst protection comes first, Protection Officers are expected to ensure their principal arrives on time for each visit. This sometimes means a gentle word in the ear of the principal who might be staying too long in one location, ‘Ma’am, it might be time to think about heading-off’.

The Protection Officers are also expected to be able to answer any questions the principal might have about the site they are visiting. So as we made our way to the Battle of Bannockburn Centre, I was encouraged to test their knowledge, probing for information in advance of arrival (this suited me well, as I shamefully had never been to any of the tourist spots we were visiting). It had never occurred to me that this might be part of the job – protective officer come tour guide.

Our second visit to the Wallace Monument posed a new but realistic challenge for the trainees. As a faux-dignitary, I thought it was probably a good idea to wear high heels. After all, you see the Duchess of Cambridge sprinting up and down in them all the time. With little idea about the itinerary for the day, I hadn’t anticipated a short hike to get to the monument. Without saying anything, Mark, my Personal Protection Officer approached me and said: `Ma’am, to get to the Wallace monument requires walking up a hill. I’ve noticed your footwear might not be that well suited to the terrain, so if you are content to do so, I have organised a shuttle to take you to the top’. The attention to detail was quite remarkable and greatly appreciated. 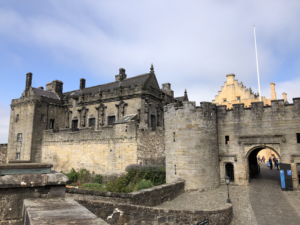 Arriving at Stirling Castle for our private tour probably gave me the biggest sense of what it would be like to be a high-profile person. As we approached the busy castle, I could see the advance party already in position; the slightly bulging dark suits (due to carrying equipment) and ear pieces, made the team instantly recognisable to me. With quite a lot of people looking on, out hopped my PPO, opening the door for me to disembark. I hadn’t been hugely aware of the team’s presence at the other sites, but because it was busier, with more potential threats, the PPOs stood closer. Always hyper vigilant, the team and I glided as one towards the enthusiastic Stirling Castle tour guide.

The fascinating tour concluded and off we went to lunch. I was escorted into the restaurant, where myself, Jim and Chris (another instructor) were given a table; the PPOs on the adjacent table. As is only natural, nature called, so I excused myself to visit the ladies. To my surprise, Claire accompanied me, providing a thorough sweep of the toilets before I entered and running the tap to give me privacy. It was quite surreal, but I suppose utterly realistic; why wouldn’t a potentially hostile person hide out in the toilets ready to pounce?

Our visits resumed, and by this point I was getting quite used to and enjoying having the team around. Our penultimate visit to the Dunmore Pineapple, a gloriously fun building within a walled garden, caused some level of stress for my team. Whilst I didn’t realise their change in demeanour, Jim pointed out that a walled garden, full of wild undergrowth and trees, is bound to cause a headache for a PPO. Although I thought it would make a lovely spot for a picnic, Jim giddily pointed out all of the potential ambush points – an occupational quirk I’m sure. 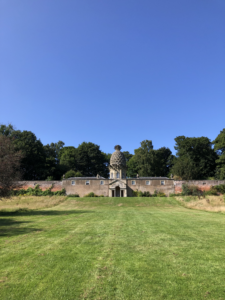 As we headed back to Tulliallan, and the day drew to a close, I began to reflect on the marvellous day I had had. Whilst it was a lovely and fun experience for me, I was so in awe of the commitment, expertise and rigour that my team of Protection Officers had shown. They were personable, polite, and ready to react at a moment’s notice.

A lot of the people I met that day were ex-military. With my Lowland Reserve Forces’ and Cadets’ Association hat on, I could clearly see how these individuals could slide so easily into the role of a PPO. Whatever role you have in the military, your ultimate goal is to defend the nation, our allies, and those around you. The desire to protect is inherent to the role, and I am sure this applies to many Police roles too. The skills gained as a Reservist or a Regular (such as firearms, discipline, planning, logistics and driving) are so transferable for a role like this.

Police Scotland do a lot to actively advocate for the Armed Forces and to help Reservists manage their civilian and Defence responsibilities. It is always great to partner with like-minded organisations, and I was absolutely thrilled and enchanted by my day as Defence Secretary.