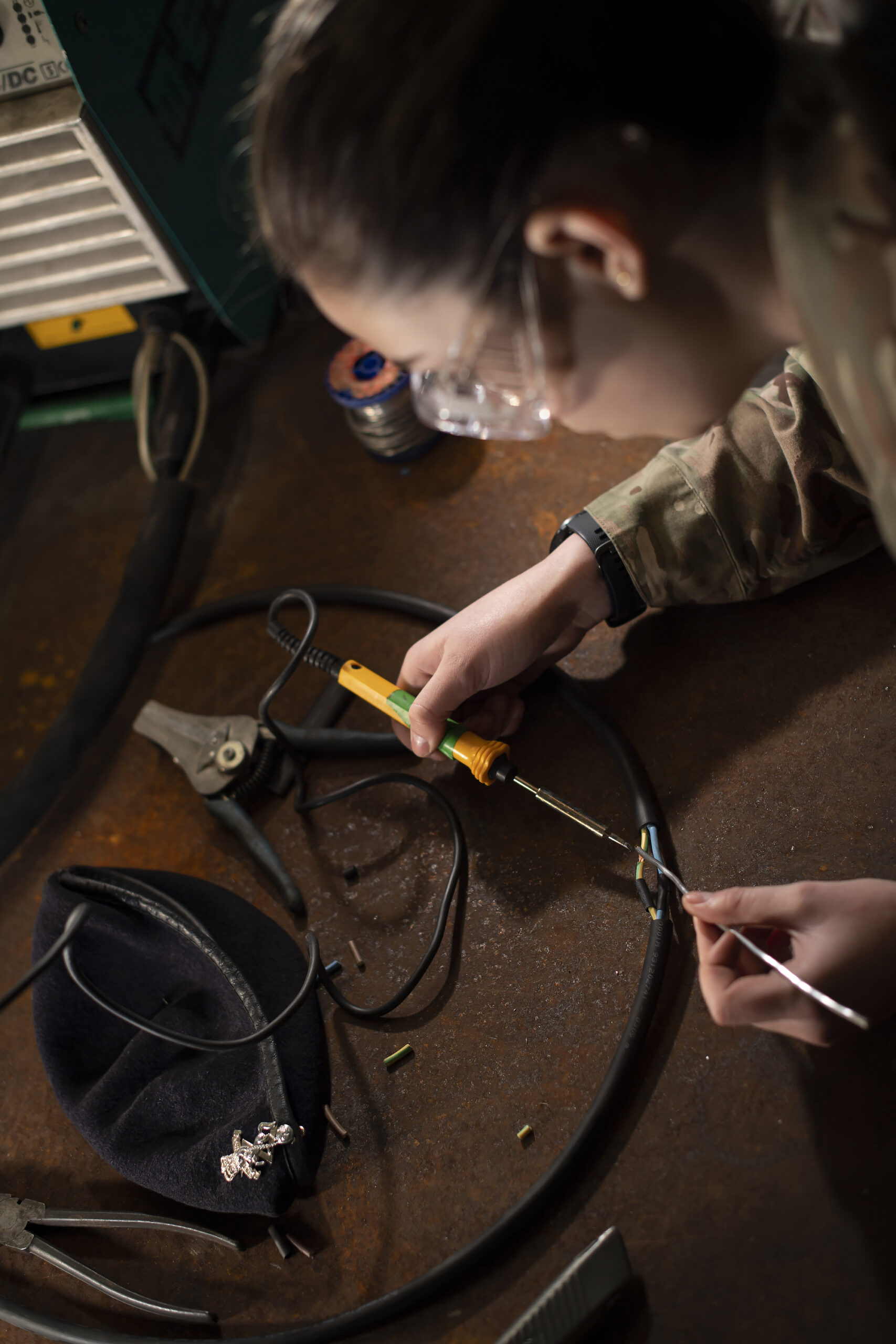 Not only is today International Women in Engineering Day (#INWED21) but it is also Reserves Day – both events designed to champion and celebrate the excellent people they represent. This serendipitous occasion has focused our Reserves Day celebrations on women who engineer within the Reserves, and who else could we turn to but 153 Recovery Company REME (Royal Electrical Mechanical Engineers)? The REME provides engineering support and is responsible for maintaining and repairing the Army’s equipment. Lowland RFCA caught up with two inspiring and accomplished REME Reservists, Abby Semple (soon to be teacher) and Jade Hynds (Community Police Officer), to find out about their Reservist experience, their civilian life, and how they ended up in the Army’s engineering division. 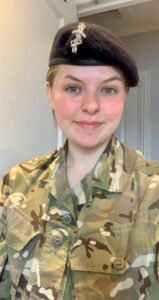 Who are you? Where are you from? What do you do?

My name is Abby Semple, I’m 22 and I live in Carluke. I’ve got a two-year-old son, I have just graduated from Glasgow Caledonian University with a degree in Mechanical Engineering and I am a Reservist with 153 Recovery Company REME (Royal Electrical Mechanical Engineers). This summer I’ll be starting my teacher training to become a Physics and Maths teacher. Life is a bit of a juggling act but it is also really fun.

Why did you want to become a Reservist?

I wanted to join the Army since I was young. I had always found studying easy and was not stressed about getting into university. However, I was very shy and figured I needed to challenge the other side of me, to stretch myself physically. So I decided that after university I would join the Regulars. However, life changed quite dramatically when I had my son two years ago and I did not want to be away from him for long periods of time. So when I saw there was a Reserve unit nearby (153 Rec Coy), I rang them up, went for an interview, had a tour and I knew instantly it was for me.

What has your Army Reserve experience been like so far?

My Reservist experience has only been during COVID-19 times which has been a bit strange and has definitely made it harder to get to know people. Having said that, I have completed my Alpha training at Redford Barracks and I have just returned from doing my Main Board at Westbury – Officer selection process.

How do you balance being a mum and a Reservist?

Perhaps surprisingly being a Reservist is a great accompaniment to being a mum. Of course, when I am away on training it feels like a real sacrifice. However, I enjoy it so much it feels worth it and it makes you appreciate what you have all the more. It also gives me something which is just for me, a chance to focus on myself and my development.

Will your Reserve experience benefit your civilian career?

Without a shadow of a doubt! As a teacher I’m going to meet all sorts of people. Being in the Reserves has taught me to get on with everyone, whatever their background. Going down the Officer route will also provide me with world-class leadership training at Sandhurst – I would imagine this will come in very useful in the classroom and the workplace.

Today (23/6/21) is International Women in Engineering Day. Tell us a bit about your degree.

I found my degree really interesting, it was really varied and included a lot of problem-solving. Essentially that is what engineering is, finding the simplest solution to complex problems. My final year project involved trying to find sustainable energy solutions in third-world countries. Our focus was on power solutions for African healthcare providers in light of COVID-19. Vaccine centres need constant access to electricity for fridges and other equipment and it’s a bit disastrous if the power cuts out. Our solution was to install mini-grids across Africa which would provide solar energy. It was a really challenging problem and a really interesting project.

You are definitely outnumbered. It was the same at school though. In my computing class there were 30 guys and I was the only girl.

Whilst you are in the minority, I’ve never felt out of place and the guys I studied alongside were always really friendly. At the end of the day, we’re all in the same boat and we all want to get through it together. 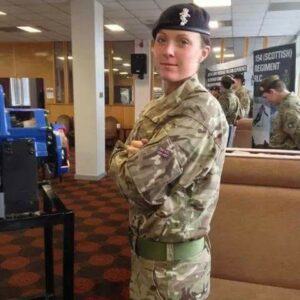 Who are you? Where are you from? What do you do?

My name is Jade Hynds, I am 31, I am a Community Police Officer, and I live in Falkirk. After spending 6 years in the Regular Army as a dental nurse, I’ve now been in the Reserves (153 Recovery Company REME) for six years.

Why did you join the Army?

I joined the Regular Army to get away from the streets of Falkirk. When I was growing up there was great pressure to go down a route I didn’t want to go down, I knew I needed a change of scene and the opportunity to break the negative cycle. So when I was asked to leave school at 15 and told not to return I joined the Army.

Was it a good decision?

Without a doubt. I now arrest people who I used to run about with and I think without the Army it could have been me. I was taught discipline and uniform standards, I was educated, I was given confidence and relational skills.

I joined up as a dental nurse because I wanted to gain a civilian qualification and I had an interest in teeth. By doing dental nursing I got my English and Maths Highers, I also read a whole book – I had never done that before! The Army made me realise that education is really important.

You left the Army Regulars after six years, what did you do next?

Immediately after leaving I took on a full-time position with 153 REME as their Recruiting Officer. It was a great position and I learnt I was actually really good at recruiting people. In that role I learnt a lot about dealing with members of the public and I learnt how to speak to everyone. After a year, with the skills I gained, I was able to apply to become a police officer. If you had told me when I joined the Army that I was going  to become a police officer I would have laughed at you – I never thought someone with my background would be able to get in. But it just shows you what the Army can do for you – it made me who I am today.

Why did you stick with the REME Reserves after you became a police officer?

I actually prefer being in the Reserves to being in the Regulars. Since being a Reservist I have travelled the world, I have challenged myself on hard exercises and I have gained so many useful life skills. I joined the REME because it was geographically the easiest Reserve unit to join, but as it turns out, I actually really enjoy learning about the vehicles and mechanics. I was working one snowy Christmas and a taxi driver had slid and blown his tire. I was the only one who knew how to fix it, so I got stuck in and got it sorted for him. That was very satisfying! I had no interest in vehicles at first but I really enjoy it now.

Does being a Reservist make you a better Police Officer?

I would say so. The Reserves are constantly developing me and pushing me which can only enhance me as a person and as a police officer. During lockdown we did leadership courses with the Reserves and it opened my eyes to how I might deal with people at work. Before I would have just gone silent in tricky situations but now I’m trying to think like a leader instead. So if I do want to progress to being a sergeant at some stage, all of this Reserve training will be really beneficial. Police Scotland have been really supportive of my Reserve involvement which massively helps.

Would you recommend joining the REME as a Reservist?

Absolutely – for me being a Reserve is a break from reality, it is escapism! I can switch off from normal life and become absorbed by Reserve life. It gives you a chance to run about and to be creative, to use different parts of your brain. Yes, you might be out of your comfort zone at times but that just helps you to grow as a person – it has helped me become the person I was meant to be!