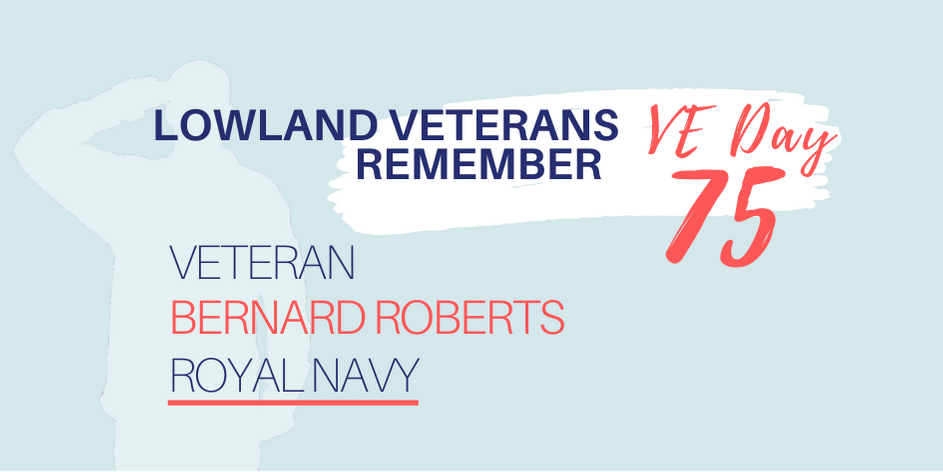 As part of the celebrations to mark VE Day 75 (75 years since Victory in Europe) Lowland RFCA spoke to Veterans based in the Lowlands of Scotland about their memories of VE Day and experiences of World War II.

94-year-old Bernard ‘Barney’ Roberts joined the Royal Navy at the age of 17 as a Seaman in 1942 and finished his service as a Leading Hand in 1947.

Originally from Dover in Kent, Barney served upon one of five mine layers in a squadron at sea.

Now settled at home in Glasgow, Barney, who suffers from Parkinson’s, generously took part in a question and answer session via video call. He recalled his memories of war at sea, the horrific scenes in Italy after Operation Avalanche and where he was on VE Day.

“My ship was in Marseille (Southern France). We knew the night before and we went ashore and we had a good time I remember.

“Then we had to go and join a parade of allied forces in Marseille and go to the Notre Damn (de Paris) for a service in the morning. That was with the American, French and British Naval contingent that were there. We attended the service and the rest of the day was ours after a big lunch.

“It was a relief to hear the war was over in Europe. Suddenly you weren’t going to be bombed or shelled or torpedoed anymore, you were going to be able to live once you got back home.

“I hadn’t seen the UK for over three years. During the war your family never knew where you were because you weren’t allowed to tell them.”

Why is it important to celebrate VE Day?

“To remember all those who gave up their lives and all the mates I lost.”

What are your memories of the war at sea?

“After six weeks training at Chatham Barracks (Kent) I was sent off to sea. Most of us were novices and the old ones looked after the youngsters quite well.

“My first ship was a mine layer based at Loch Alsh, between the Isle of Skye and the mainland. There were five mine layers in the squadron. We carried 400 mines each, maybe more.

“Most of the iron from northern Norway and Sweden was going by ship to Germany to keep the German steel industry going. So we laid thousands of mines on the routes of the Germans ships that were sailing with the iron. We called the mine field the rose garden.

“We laid our mines on several routes and we only lost one ship, HMS Port Napier blew up with all her mines on board. You can still see bits of it if you go up to Loch Alsh.”

What do you remember about being on board during action stations?

“During action stations 70 per cent of the ship was battened down below. It was only gunners, people on the bridge and signal people allowed up top. The rest are running the ship below and you couldn’t get out.

“You can hear everything. Their guns going off, you can hear your own guns, bombs getting dropped and mines going off. But you’ve to stay where you are at your action station which could be anywhere. You could be passing shells up to the guns. You could be in a fire party waiting for a message from the bridge.

“I couldn’t re-write it. It’s something you never get used to but you had your ship mates and you relied on each other.”

Is there a memory which stands out the most?

“There was one where I felt very, very sorry, the Salerno Landings (Operation Avalanche) . I was on a landing craft, we were at sea and had American tanks on board with American crews.

“We were told we were going to land at a place called Salerno in Italy. We were told over the tannoy that Italy had surrendered.  And they thought it was going to be an easy landing.

“But the Germans at Salerno were waiting for them. And it was touch and go.

“If it wasn’t for HMS Warspite, with its 16 inch guns, I don’t think the landings would have been possible. We lost hundreds of troops.