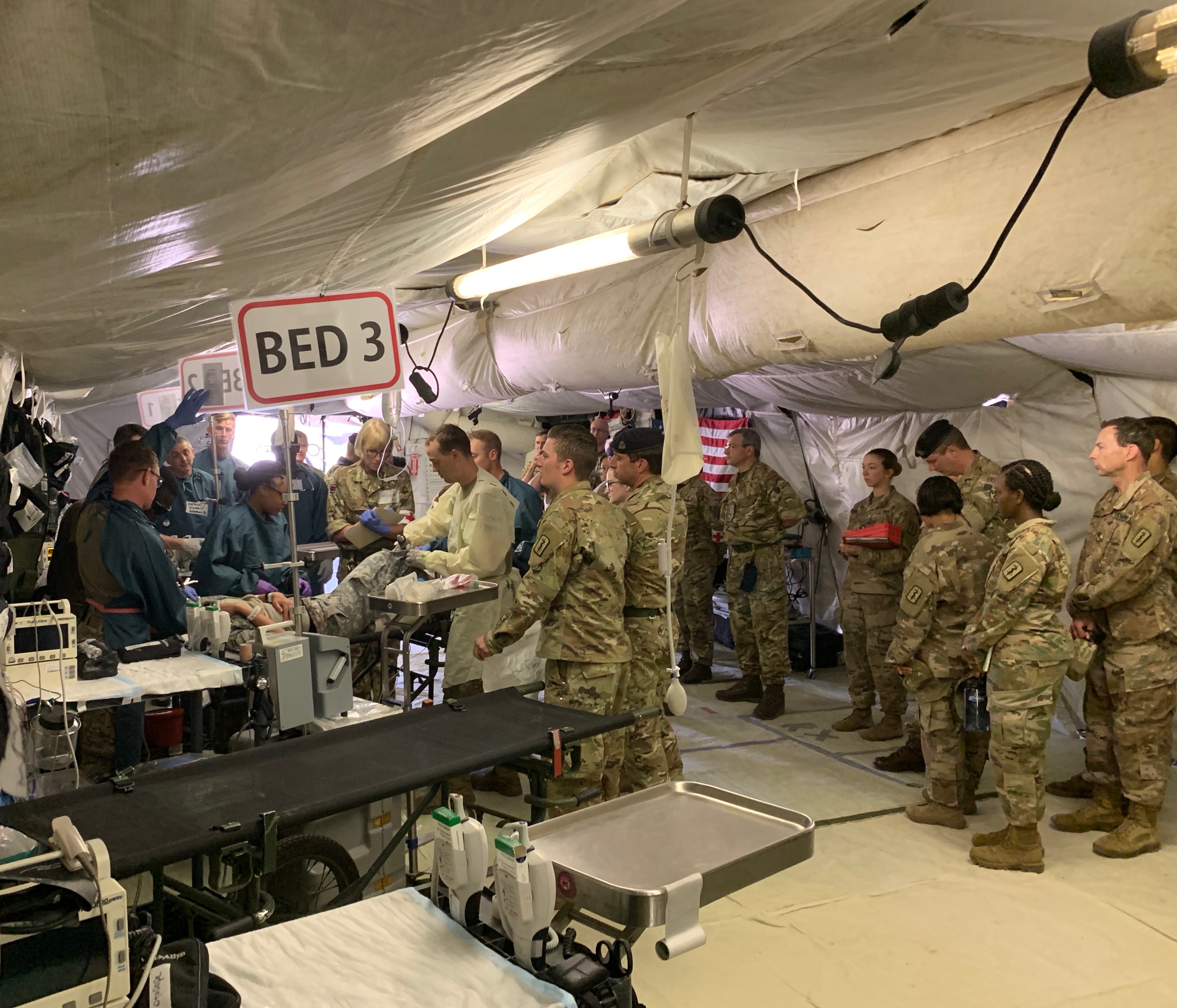 Army Reservists from across the Scottish Lowlands have demonstrated the skills and experience they bring to their civilian careers in front of NHS bosses during a NATO-led major medical exercise in Bavaria, Germany.

Army Reservists from Glasgow-headquartered 205 Field Hospital – which also has a detachment in Edinburgh – took part in the exercise led by the UK’s 2 Medical Brigade and the US’s 30 Medical Brigade. The units were tasked to deploy, establish and operate a field hospital where they would be tested on their capability. 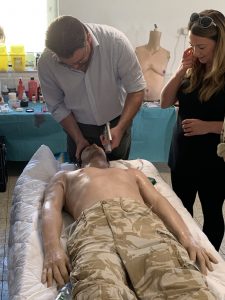 Army Reservist Adam Weir, a Lance Corporal with 205 Field Hospital, worked as a Combat Medical Technician between the emergency department and medical triage inside a state-of-the-art, chemical, biological, radiological and nuclear (CBRN) British hospital tent which was deployed for the very first time.

He said: “The experience I gained on exercise has given me loads of confidence to work in healthcare in the civilian setting. While on the exercise I gained a lot of experience which included working as part of a trauma team and maintaining and working the electro-med equipment.

“I performed daily field duties such as running the water heater, searching casualties before they were brought into the hospital at front of house and the dismantling of the CBRN tent system.

“The exercise and working with the Americans was a great experience and I hope to do something like it again.”

NATO troops demonstrated how the allied nations could work together to evacuate military and civilian casualties, including refugees.

Specialist make-up artists dressed manikins in wounds and ailments before they were stretchered into the British hospital tent facility to be treated by medical reservists out in the field.

Once sealed, the tent is designed to be CBRN-resistant for 48 hours to allow medics to work safely and prepare casualties for evacuation.

NHS chief executives from across the United Kingdom were invited by Lowland RFCA to see first-hand the clinical best practice their employees deploy, which are directly transferable into their civilian careers working in NHS hospitals. 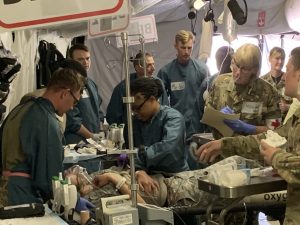 He commented: “They were practicing the whole business of evacuation in this multi-national scenario, using the British hospital tent for the first time. That was something completely new so we decided here at Lowland RFCA that this was a really good opportunity to get some people from the NHS in the UK out to have a look at how the military deals with casualties. They could compare it in their own minds to what they do back on their own health boards.

“As 205 Field Hospital were taking part in the exercises, some of the NHS leaders were witnessing some of their employees carrying out their reservist roles in their combat kit out in the field. It was a fabulous opportunity to see their employees at work.

“Some of our visitors even got stuck right in and performed medical procedures on some of the manikins, testing it for all the usual signs and demonstrated its unique capabilities. It was spectacularly good to see and made for a cracking visit.”

She said: “My trip to Exercise Saber Guardian more than met my expectations. It was very beneficial to see the depth of experience and collaboration available to our reservist staff and how as employers we need to get better at recognising the skills and knowledge they bring back to their NHS teams.”

Marie Cleary, a Staff Experience Lead at Poole Hospital NHS Foundation Trust, enjoyed watching individuals working as part of close teams and displaying their interest and motivation for the roles they were volunteering to do.

She said: “There really is nothing like walking into a field hospital and experiencing what happens. It was also really very helpful to have time to talk with the senior officers and gain further insight into the breadth of opportunity and training and an understanding of the broader skills being developed; with so many transferable to the NHS.

“In the ‘major incident’ scenario I watched closely a nurse I had seen earlier and watched what her role was within this, how she presented herself and the level of responsibility she had, and confidence and clarity shown.

“Serving as a reservist is an experience and opportunity for real and practical personal and professional development and ‘stretch’ which is not available elsewhere, with a clear and reciprocal link to work in the NHS.” 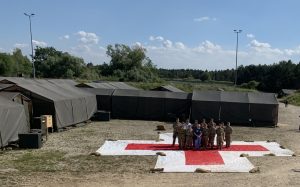 Golden Jubilee Foundation Board Chair, Susan Douglas-Scott CBE, was impressed with the commitment to embrace different approaches within each person’s profession and how the experience in the field contributes to this.

She said: “My visit with Saber Guardian was both interesting and informative. All personnel were kind, courteous and inclusive enabling me and my colleagues to engage and learn from the experience while at the same time making it fun.

“I saw that being a reservist offered each person the opportunity to develop both personally and professionally. Resilience offers critical protection with the day-to-day stress of working within pressurised clinical situations so I believe that experience in the field is a great way for NHS professionals and welcome the partnership with Saber Guardian to facilitate this.”