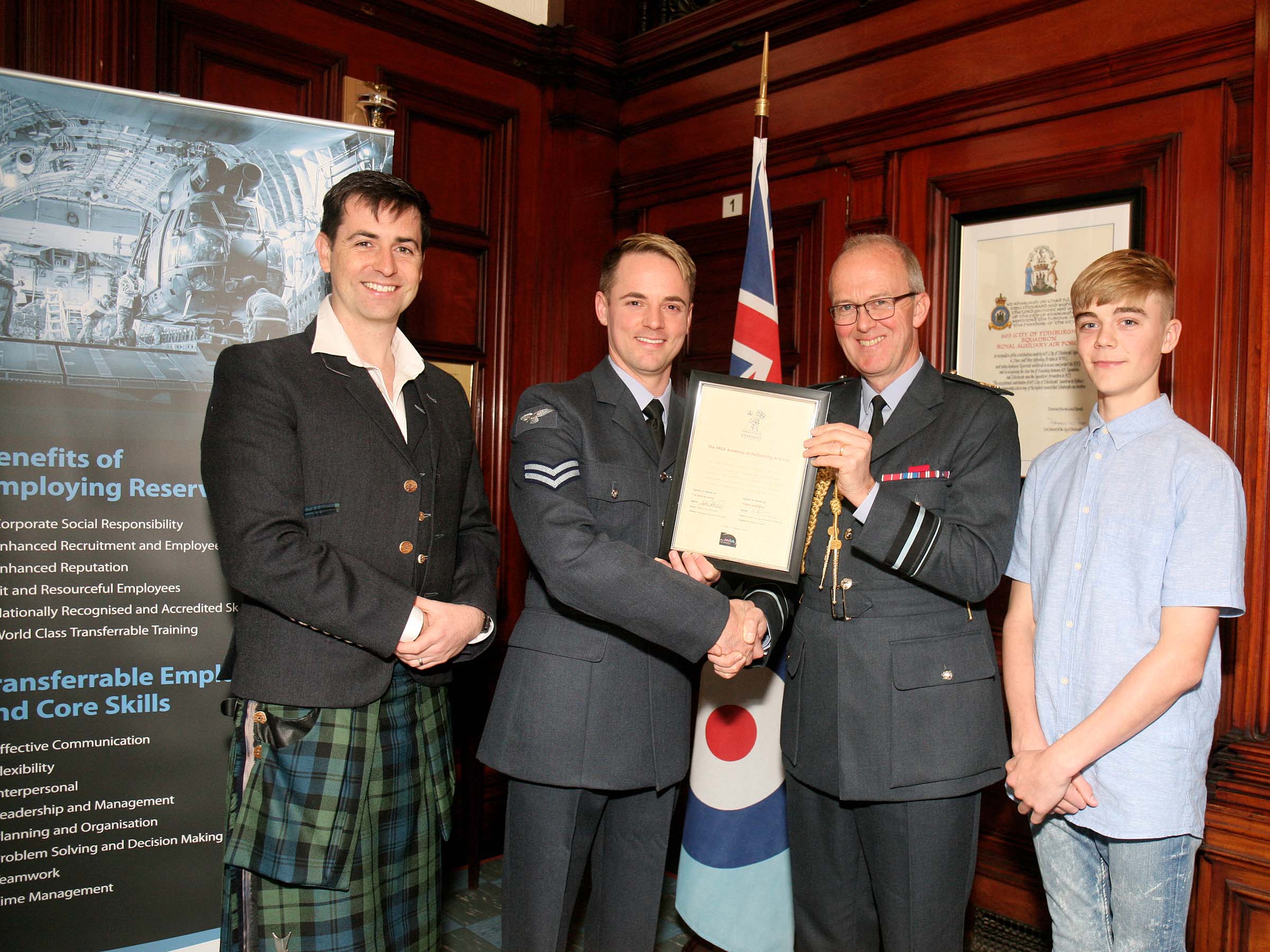 Three Scottish businesses have affirmed their commitment to supporting the Armed Forces after witnessing first-hand the positive impact Reservists and Veterans have made within the workplace.

Royal Air Force Reservists who volunteer with Edinburgh-based 603 Squadron have gained transferrable skills and experiences that are relevant and valuable in their civilian careers.

And their civilian bosses have been so impressed with the contribution Reservists have made to their business that they have signed the Armed Forces Covenant alongside Air Vice-Marshal Ross Paterson, the most senior RAF officer in Scotland, earlier this month.

The MGA Academy of Performing Arts joined Dalziel Design Associates and Brodie Engineering Ltd at the Squadron’s base in the Scottish Capital to underline their promise to those who serve, or have served, in the Armed Forces and recognise the skills, qualities and contribution they make to the civilian workplace.

Brodie Engineering operates from its depot in Kilmarnock to offer a comprehensive range of services to the rail industry across the UK and Ireland. 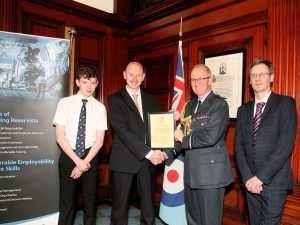 Employee Phil Heaps, a Senior Aircraftsman (SAC)with 603 Squadron, was mobilised in November 2016 to provide force protection support to RAF bases in the UK.

The engineering firm’s owner, Gerry Hilferty, says SAC Heaps’ self-discipline and leadership qualities have greatly benefitted the workforce and was determined to back the Reservist by putting pen to paper.

He said: “We are delighted to sign the Armed Forces Covenant and fully support its ethos.

“Our experience of employing Reservists and ex-service personnel is excellent. Their team spirit, self-discipline and leadership skills are a valuable asset to our business.  We highly recommend integrating Reservists within business and the workplace.”

Graham Dalziel, owner of Musselburgh-based Dalziel Design Associates, employs his son Cameron who is a Flying Officer at 603 Squadron. Cameron joined 603 and promoted to Senior Aircraftsman but, realising his potential, the unit pushed him to gain his commission. During his time at officer training he won an award as the best Officer Cadet and now leads all the part-time volunteer Reserve RAF Regiment personnel at 603 Squadron. 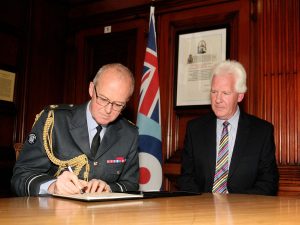 Graham commented: “Employing and supporting a Reservist, who dedicates their spare time to the service of the country, is a worthwhile investment to any business. In return you receive an individual with outstanding leadership and management skills, coupled with an expansive set of qualifications not easily gained in the civilian sector.”

The MGA Academy of Performing Arts, whose graduates now perform in London’s West End, on screen for Disney, and around the world, provide expert tuition to hundreds of youngsters every year.

The signing of the covenant was particularly meaningful to the businesses’ co-founder, Drew Gowland.  Since 2012, Drew has juggled his commitments as a thriving entrepreneur and professional actor with serving his country as a Royal Air Force Regiment Gunner Reservist and as a Corporal for the Royal Air Force Police.

Drew, who runs the performing arts school with his husband Murray Grant in Edinburgh, strongly believes his experience of serving in the military has helped him to set up and run successful businesses.

He said: “Whenever I tell people I meet through The MGA Academy that I spend my spare time serving with the Royal Air Force, they are always surprised because, on the face of it, the two jobs seem to be worlds apart.

“For me, it has always been incredibly important to make time to serve my country while running my business and it’s an honour to have now signed the Armed Forces Covenant on behalf of The MGA Academy. This will raise awareness of the work our Armed Forces do amongst our staff and students and will also lend a helping hand to those who have served by providing them and their families with discounted training. 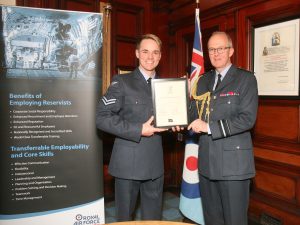 “Ultimately, it’s about showing our support and appreciation for those that either have served or continue to serve our country.

“The leadership and management training I have received from the RAF has been world-class.

“I have absolutely no doubt in my mind that a great many business and entrepreneurial ventures of mine have reached a level of success that I could not have attained without the skills that the military has taught me.”

Flight Lieutenant Ross McElhinney of 603 Squadron, organiser of the Armed Forces Covenant signing event,  said: “We recognise that the training we provide gives people a very different skill-set than what they get from their day-to-day public life so we try to give them skills that they can take back to benefit their own companies.

“While we often look at things from a military perspective, people coming from other industries look at things with a different set of eyes. There’s a huge benefit to that as it means sometimes they can see different solutions.

“Thousands of companies across the UK have signed up to the covenant. We have people from all different backgrounds joining us which is really valuable both to us and to the companies which they work for in their daily lives.”

More than 4,000 UK organisations from every sector of the economy have now signed the Armed Forces Covenant. Their commitment to honouring the Covenant includes pledges to:

Colin Vooght, Head of Engagement at Lowland Reserve Forces’ and Cadets’ Association (RFCA), the organisation which manages relationships between employers and defence in Scotland, said: “We are truly grateful to each of the three employers for demonstrating their support for the Armed Forces community and we look forward to working with them in the future.”

For more information on the Armed Forces Covenant visit www.armedforcescovenant.gov.uk.