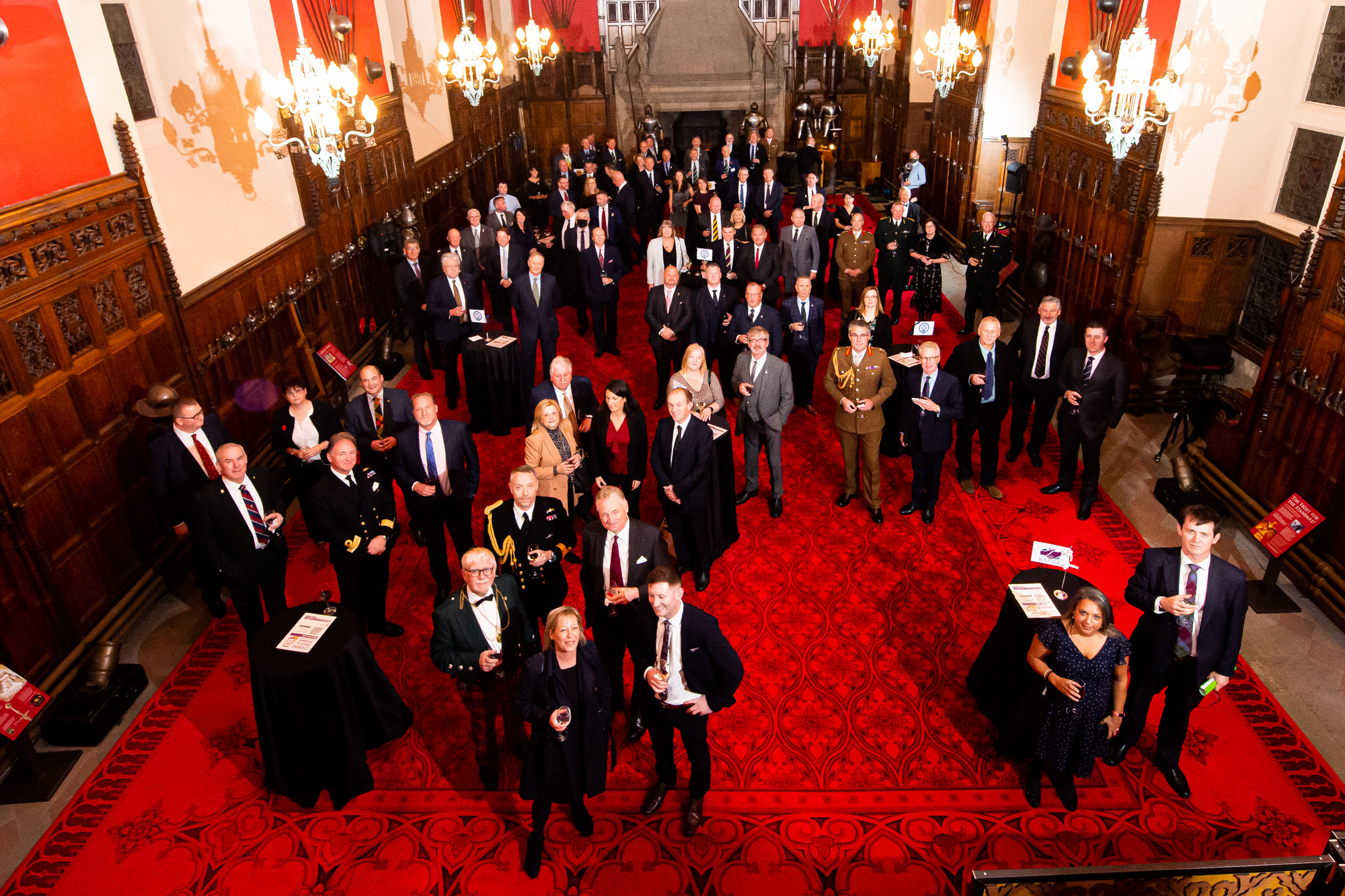 Eight Forces-friendly organisations have been awarded the Gold Employer Recognition Scheme (ERS) Award by the Ministry of Defence (MOD) in recognition of their outstanding support of the Armed Forces community.

Representing the highest badge of honour, ERS Gold Awards are awarded to those that employ and support and demonstrate they have supportive policies in place for Defence people, which includes: Reservists, Regulars, Veterans, Cadet Force Volunteers and spouses.

The following organisations, based in the Lowlands of Scotland, were presented with the ERS Gold Award in front of over 100 guests at Edinburgh Castle, 21 October 2021:

The awards were presented by Chief of Defence People, Lieutenant General James Swift.

140 organisations received the top MOD award in 2021 which brings the total number of Gold holders to 493.

This year, organisations include NHS trusts, educational institutions, financial services, hotels, charities, law firms, police services, football clubs and museums. Nearly 50 per cent are a small or medium-sized enterprise and 72 per cent are private companies, demonstrating the wide range of organisations offering support to the military community regardless of size, sector or location.

The ERS encourages employers to support Defence and to inspire others to do the same. The Gold Award is the highest accolade granted under the Scheme, reserved for businesses and organisations with the strongest commitment to supporting the military community.

Annan Athletic Football Club is an award-winning Scottish Football Association club based in Dumfries & Galloway, and hosted the Army Reserve Challenge Cup Final on two occasions. The club has a close relationship with their local Army Reserve unit, promotes Defence events and people, and supports Veterans through a variety of initiatives.

‘Annan Athletic is delighted to receive this prestigious award.

‘We do as much as we can for the Forces and we’re proud to be winners both nationally and locally.

‘Even though we have won Gold, we have no intention in slowing down our efforts to support and promote Defence.’ 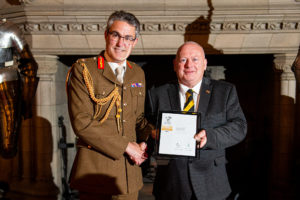 ‘On behalf of the organisation, I am delighted that NHS Ayrshire and Arran has been awarded the Gold Award. This demonstrates our commitment and support to our staff who are members of the Reserve Forces.

‘Reserve Forces provide a vital and valuable service to our country, both at home and overseas. And so it is fantastic to see that our commitment to our employees and the wider community has been recognised.’ 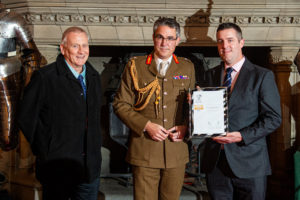 NHS Lanarkshire oversees the healthcare of over 600,000 residents. Throughout the pandemic, the health board partnered with Armed Forces personnel to swiftly roll out the COVID-19 vaccine, whilst also releasing members of their own staff for mobilisation. They have also created a unique health service specifically for past and present service personnel.

‘NHS Lanarkshire is fully committed to the Armed Forces Covenant and exhibits this both in terms of delivery of health services for Armed Forces personnel and veterans as well as support for employment of our Reserves and Veterans.

‘Being given this award is an honour for the staff and local Veterans who have designed this unique service and recognises the work that we do to support local Veterans, Reserves, Cadet Force Adult Volunteers, and their families.’ 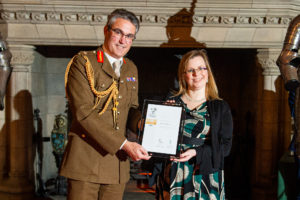 ‘This recognition is testament to the commitment of NHS National Services Scotland and our staff in supporting military personnel serving in Scotland and indeed those Veterans and Reservists within our staff.

‘I am delighted that we’re receiving this Gold ERS accreditation and congratulate everyone involved.’ 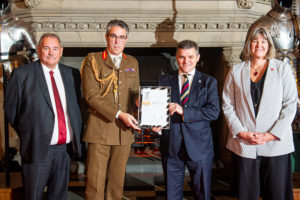 ‘ScottishPower is proud to be awarded Gold Status within the Employer Recognition Scheme in recognition of our support to the Defence and the Armed Forces community.

‘The commitment and skills of serving personnel and Reservists is crucial to our business as we continue our journey to Net Zero. Alongside a high level of technical knowledge, our business benefits from their ability to effectively collaborate, problem solve and work as part of a team. These skills are invaluable as we navigate through the energy transition, delivering a better future, quicker, for everyone.’ 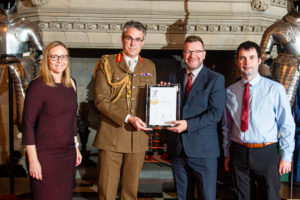 Taylor Wimpey PLC is one of the nation’s largest house building companies, catering to clients on individual and wider community scales. As well as actively recruiting from within the Armed Forces community, the company consistently promotes Defence schemes within their network. Taylor Wimpey was also pleased to release a Reservist to serve on Op RESCRIPT.

‘As a company that strives to attract a diverse range of talent, we are very proud of our involvement and commitment to the Armed Forces community and we are delighted to have been awarded an Employer Recognition Scheme (ERS) Gold Award.

‘As a signatory of the Armed Forces Covenant we are committed to ensuring that serving and former service personnel, and their families, are treated fairly and given an equal opportunity to transfer their skills into our business.

‘Our aim is to harness the transferable skills that service personnel bring to our business, while also providing appropriate technical training to set them up for success in our industry, as well as releasing Reservist employees on paid leave to attend annual military training.’

Virtue Recruitment Services Ltd is a recruitment and training specialist based in Hamilton. Having appointed an Armed Forces mentor for their staff team, VR Services are determined to support service personnel and leavers. Impressively, the company has encouraged many other employers to sign the Armed Forces Covenant, demonstrating their vocal advocacy.

‘I am extremely honoured to be receiving such an important and prestigious award.

‘Awards and recognition are not the purpose of life and not the goal of Virtue Recruitment Services. At VR, our goals go far beyond the call of duty, doing more than others expect.

‘This is what excellence is all about. It comes from striving, maintaining the highest standards, looking after the smallest detail and going the extra mile. Excellence means doing your very best, in everything and in every way.’ 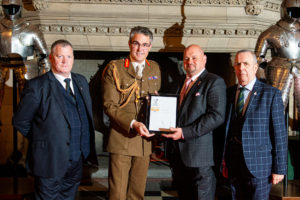 West Lothian Council is a local government body which is responsible for a wide range of services that include business support, public transport, social care and housing. As well as recruiting from within the Armed Forces community, the Council has appointed an Armed Forces champion to promote and nurture Service personnel within the organisation.

Like all Armed Forces Covenant signatories and organisations who join the Employer Recognition Scheme, West Lothian Council has partnered with Defence through Lowland Reserve Forces’ & Cadets’ Association (RFCA), a Government agency, working with the Ministry of Defence to connect Defence with the people of the Lowlands of Scotland.

‘West Lothian Council employs a significant number of Reservists and veterans, whilst a large proportion of its staff have links to the Armed Forces community.

‘This bond is reflected in the sheer amount of effort the Council has put into setting up an Armed Forces network.

‘Through West Lothian’s advocacy and commitment, a fine example has been set for other councils in Scotland. Well done to all involved, they are most deserving of a Gold ERS Award.’ 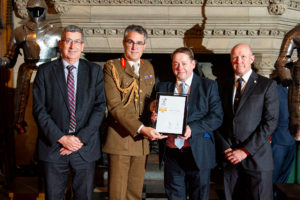 ‘I would like to thank all the organisations who have proven their support for the Defence community during such unprecedented and challenging times.

‘The vast range of those recognised this year demonstrates how employing the Armed Forces community makes a truly positive and beneficial impact for all employers, regardless of size, sector or location.’