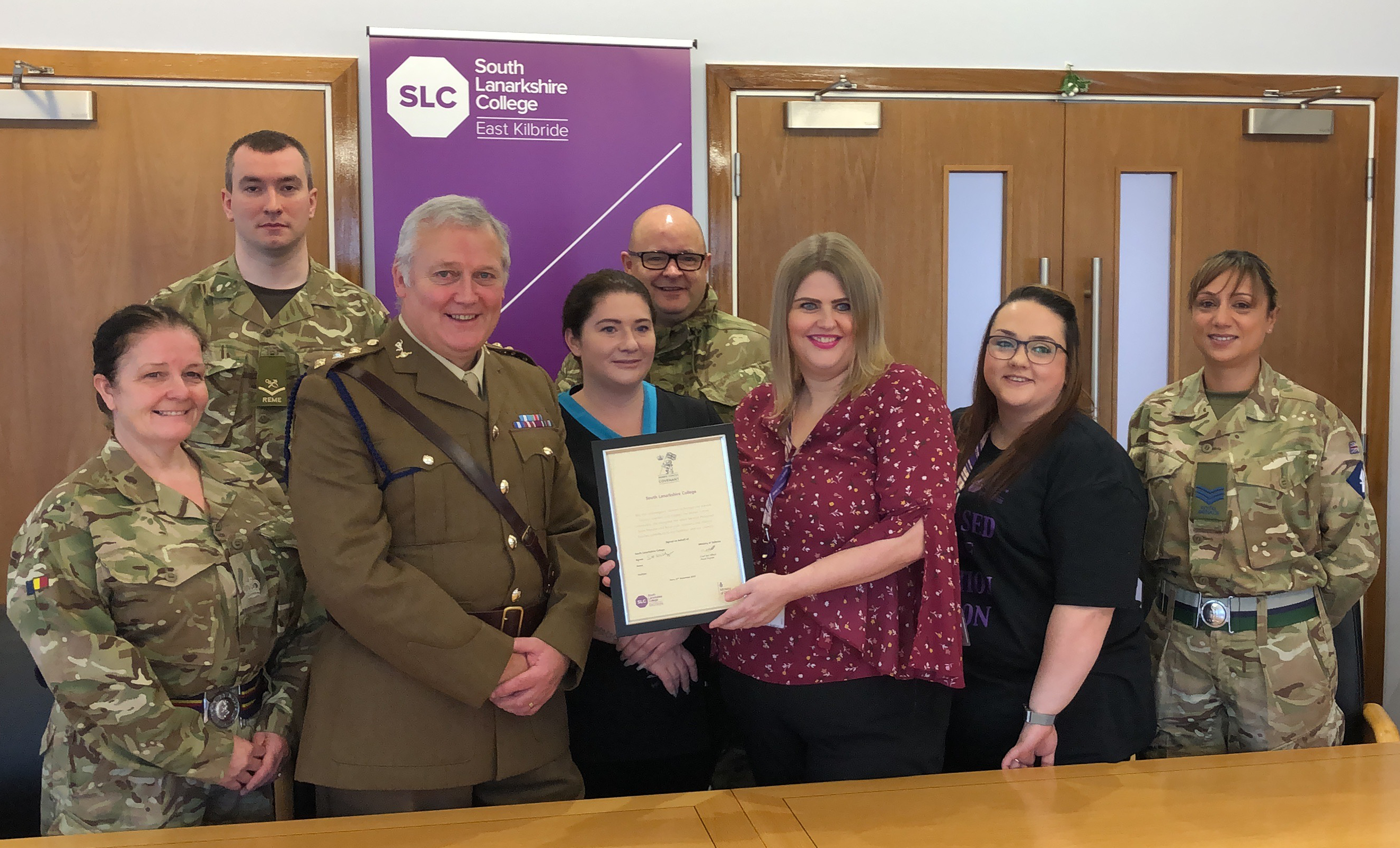 South Lanarkshire College has recognised the value of the training and experience accrued by its student Reservists and Veterans during military service by signing the Armed Forces Covenant.

The educational institute based in East Kilbride demonstrated its commitment by ensuring that those who serve, or have served in the Armed Forces and their families, are treated fairly.

It has further created a designated web page for part-time service and ex-service personnel which provides information on applying for courses and links to the student handbook.

Student Veterans, the Student President, members of the College management team and staff from across the Lanarkshire institution were joined by representatives from the Armed Forces, including military personnel from 32 (Scottish) Signal Regiment, at a special Covenant signing event on Wednesday, 27 November 2019.

Principal Stewart McKillop put pen to paper on behalf of South Lanarkshire College. He said: “We are delighted to sign the Armed Forces Covenant. We recognise that for many Veterans and their families, some aspects of life after leaving the Armed Forces can be challenging and we want to support them.

“We acknowledge the importance and value of the training and experience that is accrued during military service and want to recognise those skills during our recruitment processes.”

Captain Iain Affleck, Permanent Staff Administration Officer with 51 Signals Squadron, which has a troop stationed in East Kilbride, signed the Armed Forces Covenant on behalf of the Ministry of Defence.

He said: “I am absolutely delighted that South Lanarkshire College has signed the Armed Forces Covenant and signalled their support to Veteran and Reservist students and employees.

“For Reservists in particular, knowing they have the support of their employer is really important, so this statement of intent from South Lanarkshire College is really welcome. The partnership also has the potential to help us engage with students and staff who may want to join to the Army Reserve in East Kilbride or Hamilton, and gain extra qualifications, skills and experiences that are valued by civilian employers.”

Hugh Devlin, Regional Employer Engagement Director at Lowland Reserve Forces’ and Cadets’ Association, the organisation which manages relationships between employers and Defence in Scotland commented: “The College was the driving force for signing the Covenant.

Click here for more information about the College’s commitment to the Armed Forces.