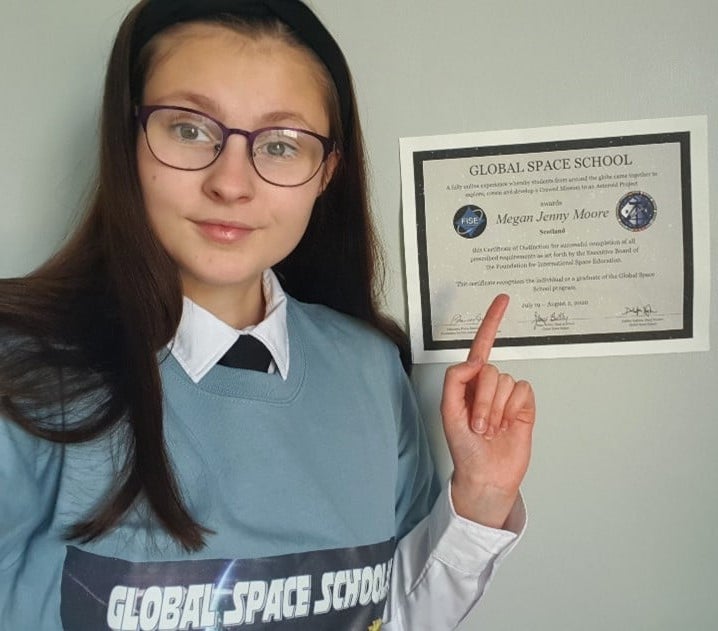 A teenager has thanked the Army Cadet Force (ACF) for equipping her with the skills that led to securing a place at a NASA space school.

Cadet Corporal Megan Jenny Moore was selected to represent Scotland on a once in a lifetime two-week adventure to the American space base in Houston, Texas.

The teenager – who attends the Girvan detachment of West Lowland Battalion ACF inn Ayrshire- has an interest in science, physics in particular, and studied hard to chase the dream of traveling to work with her idols, join space school students from around the globe and plan a theoretical future mission to Mars.

But Megan reckons she would not have been granted a place on the programme if it were not for the transferable skills she had gained from her time in the Army Cadets.

She said: “I believe that I owe the Army Cadet Force a massive thank you.

“I don’t think I’d have made it to Space School without the confidence, courage, people skills and determination I have gained throughout my time in Cadets.

“I want to personally thank every adult, senior and Cadet that has helped me progress to a point where all this was possible. I will never forget that Army Cadets has helped make me the person I am today, Global Space School Graduate of 2020.”

Prior to arriving at NASA, students were required to complete a series of assignments – each one relative to a different aspect of the Mars mission they were going to plan.

The Foundation for International Space Education then made the decision to cancel Megan’s visit to Houston and take the experience online.

Megan said: “I was completely over the moon, so excited at the idea of travelling to America alone and meeting and working alongside many of my idols out at NASA.

“Straight away my preparation began, within only a few weeks fundraisers were organised, many of them in motion, a new passport and plane tickets bought. I’d even started shopping and bought my dress for graduation.

“Timings for everything were in Houston time or UTC so finding timings for meetings and events suitable for everyone was tricky. I’d stay up all hours just to make sure I didn’t miss a minute of the virtual experience.”

The 50 students were split into groups and given a mentor who was previous Space School alumni. Each team had to choose whether it worked on transport, mining or manufacturing projects to win a fictional contract from NASA.

Throughout the programme Megan was invited on question and answer sessions with astronauts and engineers and was delighted to get the opportunity to speak to her idol, astronaut Sunita Williams.

Megan said: “Overall, the experience was amazing, truly something I shall never forget, I hope I did Scotland proud.

“Although Covid-19 ruined the original and much more exciting plan, I am still immensely grateful to have taken part in the opportunity, an amazing two weeks. I made some great virtual friends around the globe – some of which I plan to visit someday.”

To date Megan has completed her silver Duke of Edinburgh’s Award and is on her way to achieving the gold award. She is also studying the SQA Level 5 Leadership award.

“She is an enthusiastic Cadet who turns up and represents the detachment, Inkerman Company and West Lowland Battalion ACF at numerous events.

“Corporal Moore is a role model for younger Cadets and I congratulate her on her achievements and academic success thus far in school and the ACF.”