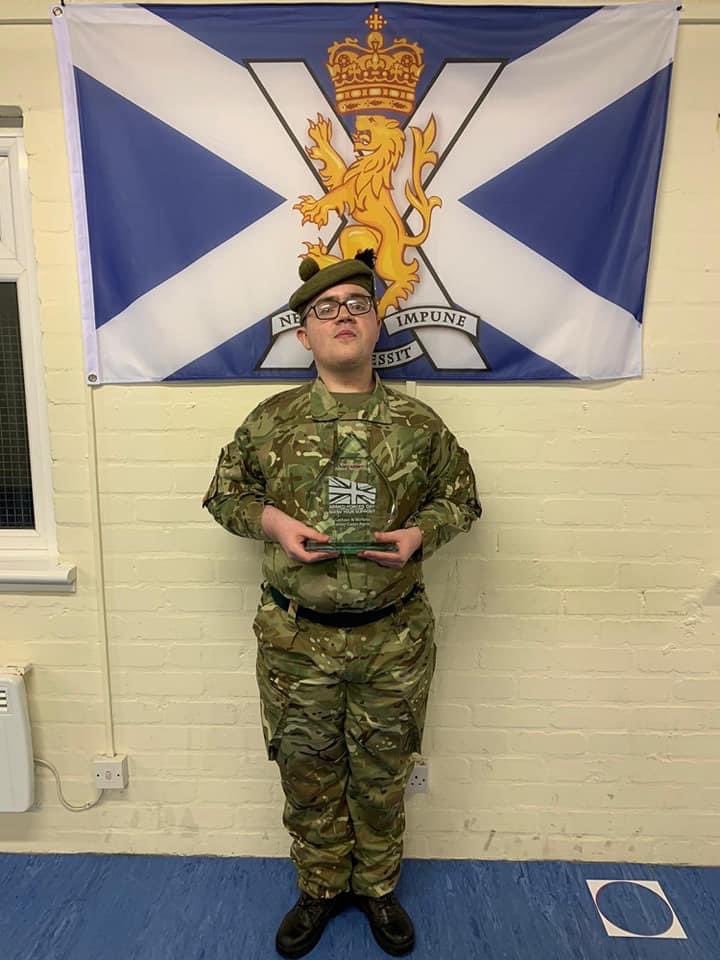 Army Cadets in West Lothian are continuing to inspire during unprecedented times.

Cadet Of The Year

Corporal Conway of Somme Company, West Lothian, has received an award for his commitment to the Army Cadet Force (ACF).

West Lothian Armed Forces Day presented the youngster with its Somme Company Cadet of The Year honour for attending almost all of his detachment training nights and virtual training evenings during lockdown while putting his all into every activity.

Corporal Conway, of the Whitburn Detachment, has also undertaken extra qualification courses and has been working towards his Duke of Edinburgh’s Award on top of his regular training.

He is a member of the Lothian and Borders Battalion ACF. Corporal Conway’s Company Commander, Colin Jamieson, said:

“We are so very proud of you. Every night you turn up in smart uniform and every activity we do you put your heart and soul into. You are a fine example of – ‘you get out the ACF what you put in’.

“To the rest of the Cadets, this could be you next year – keep working hard!”

Another Cadet from Somme Company overcame his own expectations when he took part in the Virtual Kilt Walk Weekend.

Corporal Greig from 26 Platoon Livingston set himself a challenge of 15 miles of walking, running and cycling over the three days. But in the end he managed 26 miles and raised over £2000 for charity in the process.

The young star was fundraising for the Harmeny Education Trust – which supports young people who have experienced early years trauma. And to his delight, Corporal Greig’s cash he raised was then doubled by Scottish businessman and entrepreneur Sir Tom Hunter. That meant his final total had reached a whopping £4,123.72!

The news comes just a month after a Cadet from the same Platoon saved a man from a suspected heart attack thanks to the first aid skills and training he learned with the Army Cadets.