You are here: Home > Cadets 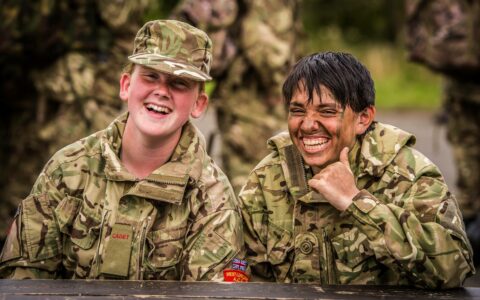 The Cadet Organisations are built on the simple idea of using military skills to bring unparalleled opportunities for young people from all walks of life to learn, grow and excel. They are run by thousands of ordinary people, doing extraordinary things.

Around 10,000 young people are part of the Cadet Organisations in Scotland, and are supported by nearly 2,000 Cadet Force Adult Volunteers. Cadet Organisations are some of the largest and oldest voluntary youth organisations in the country and provide military themed activities and training for young people aged 12 to 18, and a unique opportunity for fun, friendship, action and adventure as well as new skills and qualifications.

Her Majesty’s Lord Lieutenants are invited to select members of the Sea Cadet Corps, the Army Cadet Force and the RAF Air Cadets and appoint them as a Lord Lieutenant’s Cadet to support them in their official duties.

The Lord Lieutenants’ Cadets are typically amongst the best Cadets in their respective organisations – having completed the majority of their Cadet training – and tend to carry the rank of Cadet Sergeant or above. The Cadets are examples of all that young people can achieve through the Cadet experience.

Being appointed Lord Lieutenant’s Cadet is a massive privilege and is often the highlight of an individual Cadet’s career. They are given the rare opportunity to accompany their Lord Lieutenant at high-profile civic and military occasions (Armed Forces Day and Remembrance Sunday) and Royal Visits, supporting their Lord Lieutenant and acting as ambassador for their local unit and the wider Cadet movement.

Lieutenancy Areas in Lowlands of Scotland: