You are here: Home > Public News > Behind the Camouflage: Flight Lieutenant Mark Grange
◄Back to News 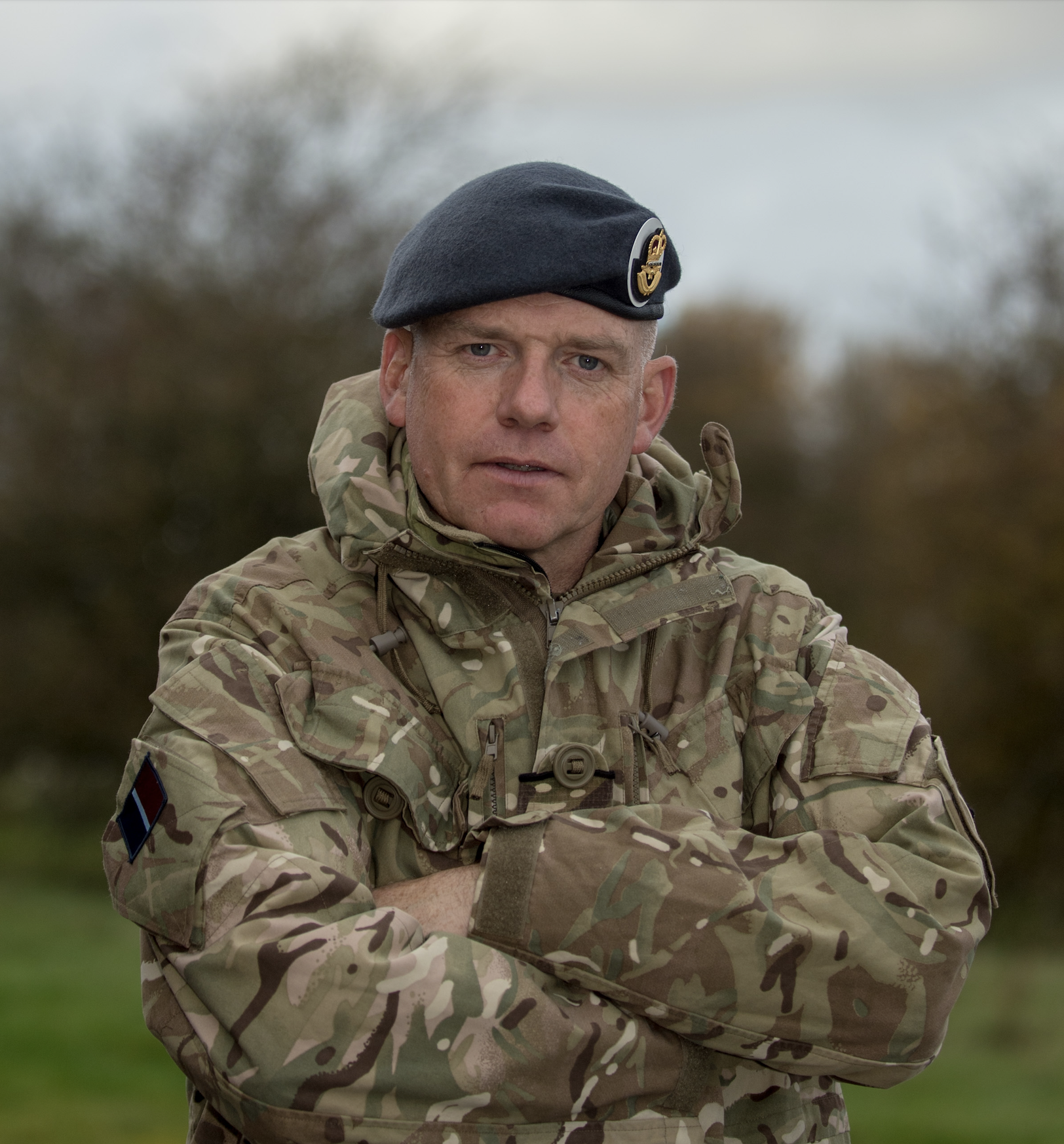 Over the last year we’ve become well acquainted with the sight of Armed Forces personnel serving on home soil. Perhaps more so than ever before! Swapping combat helmets for aprons and guns for swabs, many members of the Armed Forces have been serving our nation in the fight against Covid. But how exactly have these uniformed men and women been involved? We caught up with RAF Reservist Flight Lieutenant Mark Grange, of 603(City of Edinburgh) Squadron Royal Auxiliary Air Force, who has been mobilised twice in the last year.

Why did you join the Reserves?

After I left school I was really keen to join the police but a few people suggested I should get a bit more life experience under my belt. So I actually joined the RAF as an airman in 1987, serving mostly in Northern Ireland. I loved my time with the RAF, in fact I still have a yearly reunion with the guys I served with. In 1991 I left the RAF and became a police officer. My career in the police was great – full of challenge and accomplishment. At the end of 27 years I retired from the Police as a superintendent ready to launch my own cycling business. I began thinking about joining the Reserves towards the end of my civilian policing career. I had always had an infinity with the military and so it seemed like an obvious move.

When I went to join up I came across a bit of a stumbling block. Given my civilian role and experience, when I applied to become a Reserve I had wanted to join as a Commissioned Officer, but the RAF didn’t allow you to join as an Officer unless you had held that rank before. I have to say, I wasn’t at all sure about going from being a superintendent at work to being at the bottom again. Initially, I was a bit deflated, but after nine months of thinking about it I just decided, why not? So I joined up as an airman instead! It’s fair to say it was a bit of a shock to the system! However, when I did then become a commissioned officer in 2018, I think it worked in my favour. The Reservists I worked with knew I had worked hard and come up through the ranks – they knew I had been in their boots. It’s also helped me to understand and to emphasize with my flight better – so it all worked out well in the end! 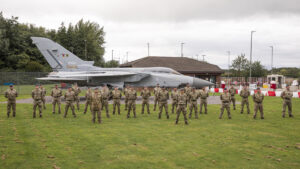 Since the start of the pandemic you’ve been mobilised twice. What was your first mobilisation?

I volunteered at the beginning of Operation Rescript and was mobilised in June to run a Mobile Testing Unit (MTU) in the North of England. The Army had been manning all of the MTUs, so whilst we were working with a Royal Artillery Covid response team, we actually had a MTU which was entirely made up of 603 Squadron. It was a fairly straightforward task but the days were incredibly long. In the morning we would be given a MTU vehicle which had all the fridges and testing equipment in it. We would then leave Leeming (our base), drive to the Regional Testing Centre (RTC) at Humber Bridge to collect all of the new swabs. From there we would drive to our spot for the day, e.g. a carpark in Hull or Grimsby. The public could then drive in and we would assist them with their test, giving them a swab and some direction. We would then collect the swabs and take them back to the RTC at the end of the day.

Were you keen to get involved with the Covid effort?

Definitely, for me it was a no-brainer. I could see that Covid was going to have a huge impact on my business, so I volunteered straight away. The RAF have been great, they’ve paid for my business to be mothballed, they’ve paid for storage and for some of the bills too. Rather than struggling with a business I couldn’t run anyway at present I can get involved with something really worthwhile and get paid too. 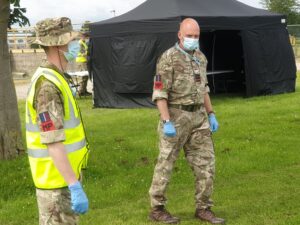 What were some of the challenges involved with running the MTUs?

Generally speaking we had very few problems however, of course there were a few challenges.

Our MTU was largely made up of RAF Regiment who are really trained to fire weapons and to react hard if there’s a threat. That’s quite a contrast to handling unwell members of the public in a Grimsby car park. So we all had to shift our mind-set, leaning more on our relational skills rather than our reactionary skills.

The practicalities were also quite challenging. For example, when you come for a test you need to have booked in and you need to have a telephone number. On quite a few occasions senior members of the public would turn up without booking, without being able to use their mobiles, or not knowing their telephone numbers. The official line is that if you’re not booked in, we won’t see you. But we’re trained to problem solve and to do our best to help where we can. So we had members of the team using their own mobiles, to try and book folk in, to try and find out mobile numbers or to try and talk people through using their smartphones – that’s all pretty difficult when you’re trying to maintain social distancing too.

The test is pretty invasive and tends to trigger your gag reflex. We had one lady who took the test in her car but ended up vomiting. So we then needed to get her out of the car, get her cleaned up, throw away the ruined samples, get her back in the car and then try and do the test again. You need to remember that people are coming for tests because they really don’t feel well so managing this was really quite challenging.

You’re currently mobilised on your second operation since the start of the pandemic. What are you doing this time?

In mid September, quite a few mobilisation roles came up on Defence net, which for officers is quite unusual. I applied to be a military liaison officer in the North of England to work with the civil authorities which played to my skill set. In essence my role has been to meet with the Local Resilience Forum (made of local first responders and secondary responders) and to provide a link with the Defence. The Local Resilience Forum plans and responds to regional risks and helps to provide a better joint response between the various agencies, such as the police, the fire service or electrical companies. On occasion these risks might need military involvement so it’s my job to be aware of the situation on the ground and to connect these regions with Defence where necessary.

For example, a few weeks ago the Netherlands said that all hauliers entering the country needed to have a negative test before they did so. Lorries to the Netherlands often leave from Hull, so suddenly it looked like we were faced with a very similar situation to one seen in Dover. In Dover a MACA (Military Aid Civil Authorities) request was made so the military got involved with testing the hauliers. Initially there was a bit of an expectation from the local authorities that the military would get involved again but we’re only to get involved if every other option has been exhausted. So I went back to them and said, yes we could make a MACA request, but first all other alternative options needed to be explored. As it happened, the ports were able to bring in a commercial company very quickly who dealt with it all really well. I guess this means that the military can be used somewhere else and we’re managing our resources well. I’ve done a lot of emergency response tasks in my previous roles so I’m glad to get involved. As well as serving the country and being able to play my part I’ve also got an awful lot out of it! 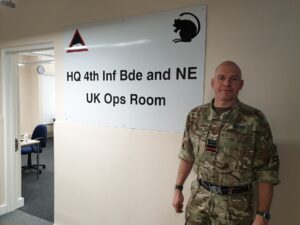 Mark, you are a part-time volunteer Reserve Provost Officer, what exactly does that mean and how does that compare to  your normal Reserve service?

Being a Provost Officer really means being part of the RAF Police. RAF Police assist with investigations, crime, security issues and we provide security for RAF people and assets. Whether we’re on UK or overseas operations, our job is to protect the Air Force.

In normal times I command a flight of RAF Police personnel at 603 Squadron. The Squadron is made up of a HQ (Execs, HR, Logs and Combat Support) and four flights of Part Time Volunteer Reservists  – 2 RAF Police and 2 RAF Regiment; each of 26 personnel. Seventy per cent  of my time is about acting as a conduit between the Squadron and the members of my flight, maintaining relationships and making sure all the Reserves are getting as good an experience as possible. Thirty per cent  of my time is about ensuring the flight gets the best training it can, so that if and when they are mobilised, they’ll be able to fit in anywhere and do the best possible job they can.