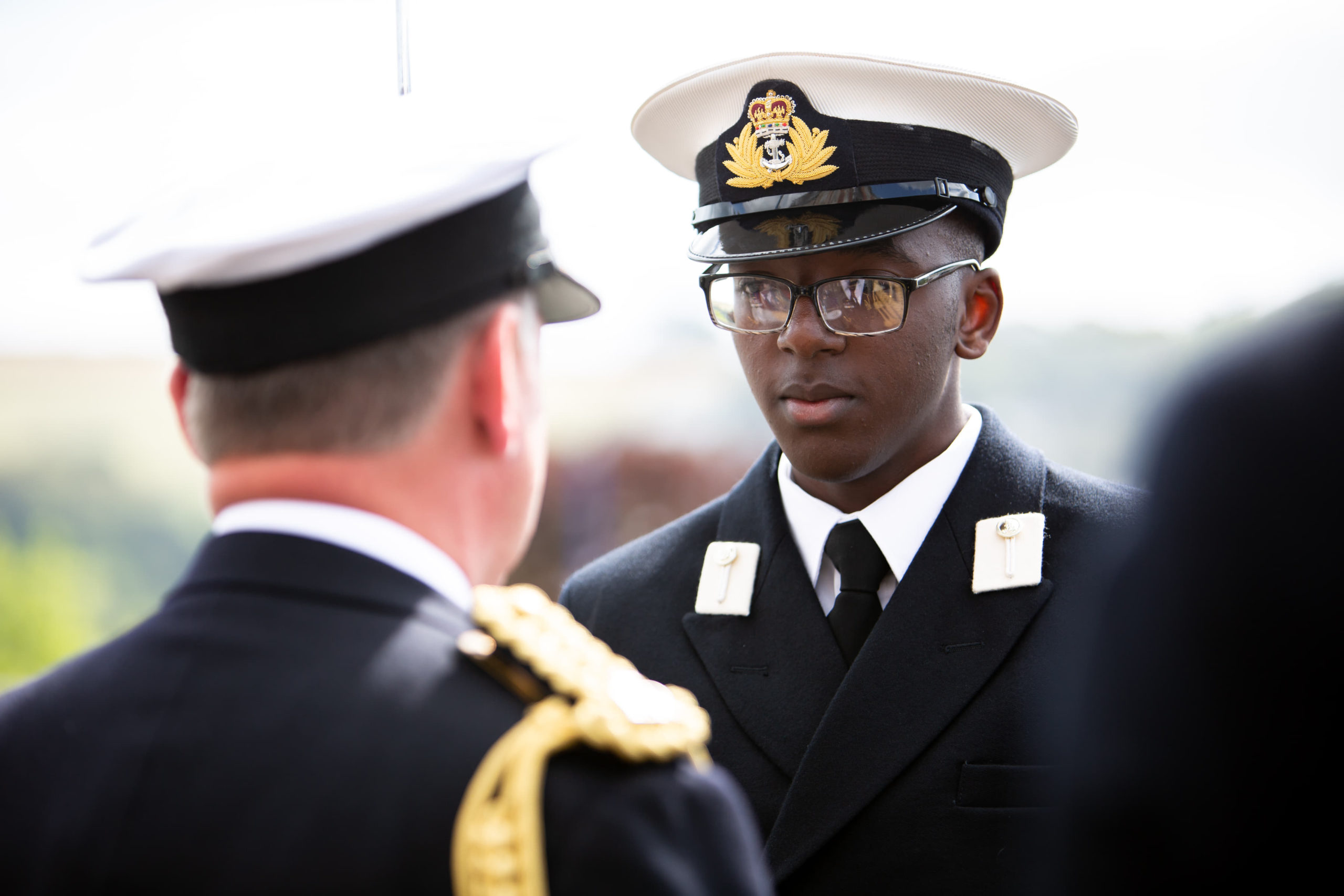 Having fled horrific conflict in her African homeland with her then infant son, you could forgive Emmanuel Ineza’s mother for being somewhat sceptical of him joining the British Armed Forces in his teens.

But once she understood the vast amount of varied skills, countless extraordinary opportunities and epic experiences on offer to one so young, the chance to join the Royal Naval Reserves was one she did not want him to pass up.

Now looking back on his decision to join HMS Dalriada, his local unit in Glasgow, Midshipman Ineza knows there will no doubt be many in the Reserves and Cadets in the three Services whose parents required some level of similar persuasion.

“At first my mum wasn’t on board. We had to leave the fighting in Rwanda when I was an infant, arriving in the UK at the age of two, so it was only natural for my mum to relate the Armed Forces with war.

“Due to mum’s strong concerns, I temporarily dropped out of the recruitment process. Persuading her of the skills I could receive and of the potential job opportunities was no mean feat. However, mum soon began to buy into the vision. Whilst she saw skills as valuable, the personal development on offer was most appealing. Mum began to see that the Navy could develop my teamwork and leadership skills, attributes that would never cease to serve me well in later life as a civilian.

“We are big on volunteering in my family so that was another reason she could relate to because, while I was gaining these invaluable skills like teamwork and leadership I could take into a civilian job, my mum knew I would be doing good meaningful work at the same time.”

Emmanuel grew up in Glasgow with his mother and sister. Through involvement with the Boy’s Brigade and the Army Cadet Force he became well acquainted with the Armed Forces. During his early days as a Mechanical Engineering student at Strathclyde University, Emmanuel listened to a podcast on World War One.

“I got an appreciation for the Royal Navy as a whole when I came across a podcast about how it had a major impact on World War One and I learned all about its role in helping to win the war. That’s when I started to look into what I could do.

“I heard about the Reserves at a freshers fair in George Square where I spoke to the Navy’s recruitment team about the joining process and found out I could be a Reservist while I was at university.”

With the backing from his mum and winds of motivation in his sails, Emmanuel set out to complete psychometric, physical and medical tests before embarking on his training with HMS Dalriada.

“You have to go through your entry level tests while you’re settling in at your unit. I was nervous at first when I went into Dalriada for the first time on a drill night. It’s a well decorated facility with pictures of all the Commanding Officers along one wall and desk-filled classrooms. You definitely stand out being in civilian clothes.

“But in those next few weeks when you get your uniform and get to know the staff and the people around you in the training, you really become part of the team.”

A typical training process takes roughly two years. However, senior ranked personnel quickly spotted potential in Emmanuel from the start and he was offered the chance to attend the Accelerated Officers Programme.

Designed to condense two years of weekends and drill nights, and adapt it into a non-stop eight-week period, the course takes recruits through Initial Naval Training to Officer Cadets and finally to the rank of Midshipmen.

This intensive process culminates in a Pass Out Parade at Britannia Royal Naval College (BRNC), Dartmouth, the Royal Navy’s training academy for officers.

“It was an intense experience but also a lot of fun. There are a lot of high standards to adhere to which keeps you on your toes. In the first week you are a bit apprehensive but you soon get to know everyone and make friends. We got an introduction to battle physical training and got involved in some of the sports like football when we got the chance to unwind.

“You do the theory during the week and then on the weekends you get the chance to go out in the field and practice what you’ve learned.

“I was surprised I enjoyed a lot of the physical stuff, a lot more than I thought I would. It was really important to work as part of a team and those skills are brilliant to take back into civilian life.”

Emmanuel has not yet decided what path he will take once he has finished his Masters degree at university. One thing is for sure, he will be continuing his role in the Royal Naval Reserve.

“The good thing about being in the Reserves is that they are really flexible. I’m a student and I am still able to get extra time away to study for exams which is really helpful. It’s great for student life.

“Once I finish university, I have two possible routes. If I decide to serve in the Navy full-time, then I aspire to being an Engineering Officer.

However, if I’m offered a job out with the Navy, I fully intend to continue in my Reserve capacity.”