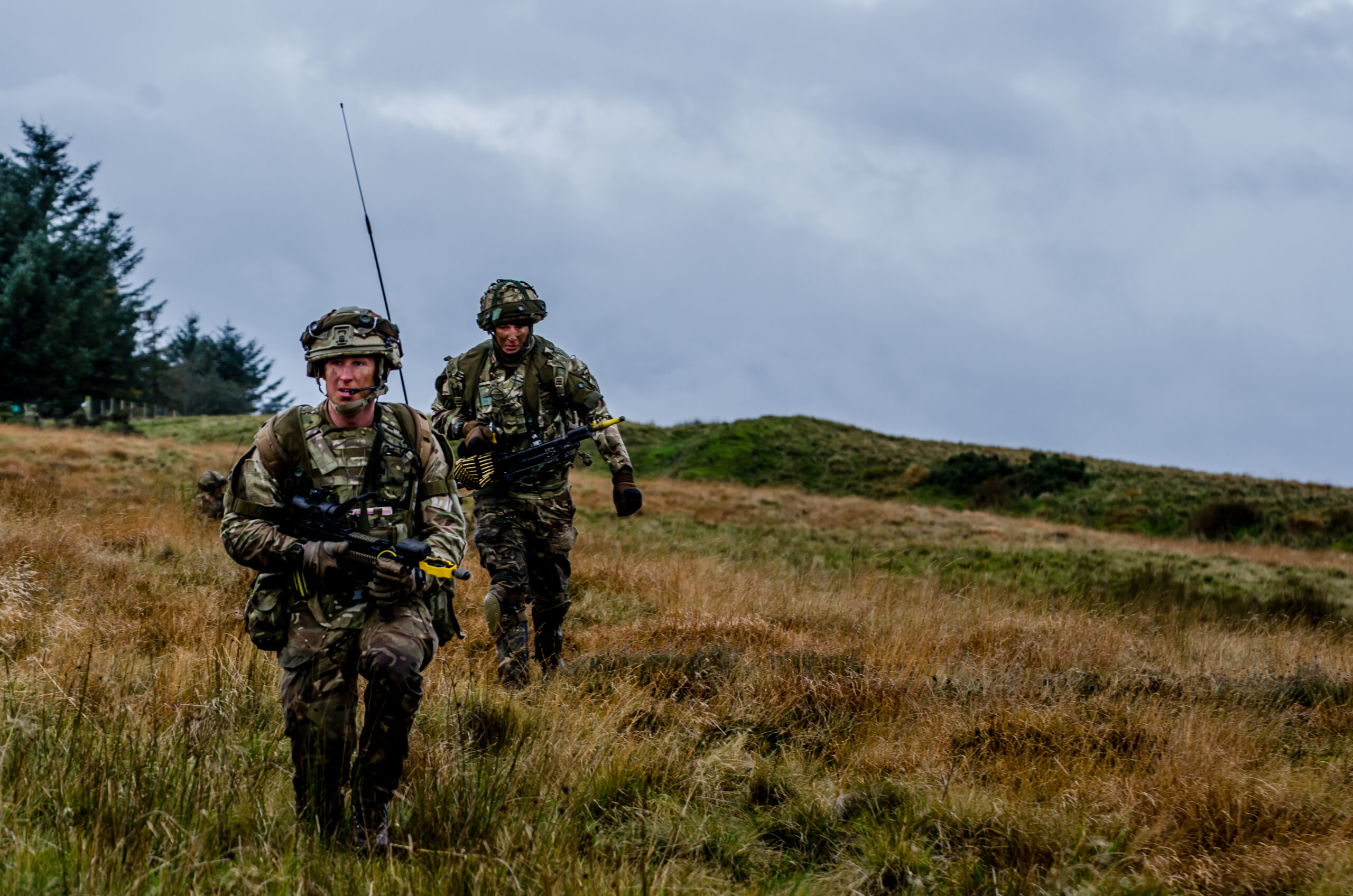 Army Reserve recruits have been put through their paces during phase one training that will equip them with the skills, knowledge and confidence to become a soldier.

In what is dubbed ‘Battle Camp’ by troops, the training is an intense programme, consisting of weapon training, ranges, fieldcraft and a five-night exercise.

The first stage, named Alpha, is designed to lay the foundations of military character for recruits and takes place during four training weekends over eight weeks.

The next stage of training, Bravo, is a 15.5-day course and develops training covered during Alpha as well as deployments on two field training exercises.

Five recruits from 153 Recovery Company attended and completed phase one training at ATU (Army Training unit) Edinburgh during March and April 2021. With specially recorded diary entries, Lowland RFCA got a behind the scenes look at what being a recruit for the Army Reserves is really like.

27-29 March: The first few days were primarily classroom work, preparing us for practical lessons and tests before moving on to the 25m firing range at Dreghorn Barracks for our first live shoots. The weekend also introduced us to CBRN (Chemical, Biological, Radiological and Nuclear) tests and got our six-mile load carry test out the way.

30-31 March: We moved to Barry Buddon, Carnoustie, for the main live firing package of the training course, using the camp’s large range area for our shooting. Here we did shooting up to 300m in a variety of positions.

1 April: We completed fitness tests and had an introduction to Battlefield Casualty Drills (BCD). We all re-did the entry fitness tests (mid-thigh pull, medicine ball, bleep test) across a morning and moved into BCD for the rest of the day, getting our hands on the equipment and being taught the drills to get some experience on how to do it in the field.

2 April: Some further BCD in the morning but the major event of the day was bayonet drills. We checked our weapons back out and were issued bayonets, then ran ragged around a field doing Battle Physical training to get us fired up. We were then taught the correct bayonet drills and each got some time in a lane to attack target dummies in order to show we understood it. Some loved it, some didn’t, I personally enjoyed it.

3 April: Day one of the exercise. The morning was a refresher on map reading skills and we then piled onto coaches and deployed to Otterburn Training Area, a few hours’ drive south. We were dropped off a short distance from our first FOB (forward operating base) position and tabbed in, spending the evening getting set up there and getting a refresher on matching terrain to a map as well as an introduction to sentry duties.

4 April: The day was spent in the field doing a round-robin of fieldcraft lessons. Pairs fire-and-manoeuvre, stalking, camouflage and concealment, patrolling, hand signals, and dealing with obstacles were all covered. Stalking was definitely the highlight for almost everyone: after a period of instruction each section was pitted against another, with one section on lookout and another trying to apply the lessons by moving through long grass, trying to get as close as possible before being spotted, then swapping roles. In the evening we were taught how to patrol in low light conditions.

5 April: The day was spent learning about Patrol Harbours: how to select a site, how to occupy it, and how to best use it for conducting operations in the field. An introduction was also given on how to evacuate the location under fire.The day ended with us taking all our equipment (30-35kg total for most) across the training area on foot to our new Harbour location, which was physically very challenging. We settled down into Harbour Routine for the night.

6 April: This day was spent building on initial fire-and-manoeuvre skills. This was a very active day, a lot of running around and a lot of blank ammunition expended. We all got quite good at “bombing-up” magazines with fresh rounds.

7 April: Stand to! The lessons on evacuating a Harbour under fire were put into action at 5am. All were successfully extracted and only a few bungee cords and tent pegs were forgotten in the rush. We topped off the morning by establishing a snap ambush and ‘defeating’ the pursuing enemy forces. The afternoon was spent rehearsing our own attack on the enemy position.

8 April: The final day of the exercise. We woke before dawn and, well rehearsed from yesterday, were quickly at the Line of Departure for our attack. This was an exciting morning, all four sections going forwards as one and nothing spared in terms of flares, smoke grenades, and blank ammunition. The platoon attacked perimeter enemy positions then sections leapfrogged each other to overwhelm successive layers of defences, culminating on one section pushing through the enemy compound itself. Once the exercise ended we were soon on coaches back home to Redford. Everyone was looking forward to a real shower. The rest of the day was given over to getting weapons cleaned, washings on and kit checks done.

9-10 April: Two days of drill practice for the passing-off parade, thankfully broken up with a trip to the pool (for the Military Swim Test) and a warm classroom (for the map reading theory test). These were quieter, easier days to recover from the six days in the field, for which we were all thankful.

11 April: Pass-off day. Due to the sad news regarding the passing of His Royal Highness the Duke of Edinburgh, the Army halted all parades out of respect, so our passing off was instead done static.