You are here: Home > Public News > Glasgow Formally Recognises Reservists and Cadets for their Commitment and Selfless Service
◄Back to News 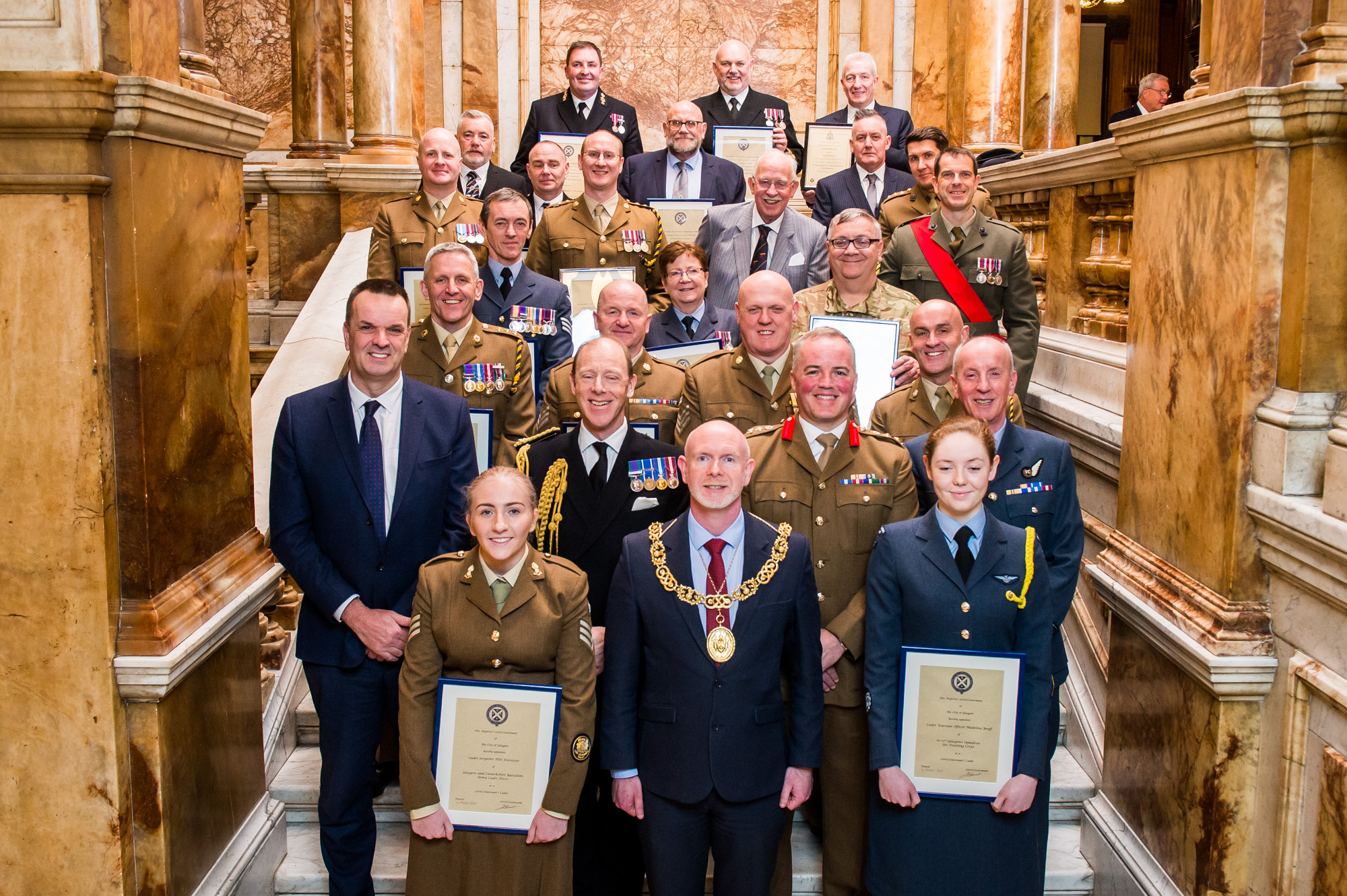 Armed Forces Reservists, Cadets and Volunteers with Cadet organisations have been honoured for their commitment and sacrifice by the City of Glasgow.

The Right Honourable Lord Provost of Glasgow, Philip Braat, presented certificates of meritorious service to Reservists and Cadet Force Adult Volunteers, in his first appointment as Her Majesty’s Lord Lieutenant, at a special ceremony held in the City Chambers on Wednesday 4 March 2020.

Nineteen individuals were formally recognised by the city, where more than 1,300 citizens serve in the Reserve Forces, for their significant contribution to Defence through their commitment to their individual units, communities and operational service.

Lord Lieutenant Philip Braat, an Honorary Officer with the Royal Navy Reserve and former Reservist, said: “Glasgow has a long and proud history of supporting military Reservists and Cadets. We recognise the enormous benefits it brings.

“My congratulations and grateful thanks to all the recipients for their commitment and selfless service to our communities. I would also like to pay tribute to their families, friends and employers who have lent them their support, and all the military personnel and volunteers who have aided them in their success.”

The event hosted by Lowland Reserve Forces’ and Cadets’ Association (RFCA) was also an opportunity to recognise employers who have shown support for the Armed Forces.

2019 Gold ERS award winners, City Building, were also celebrated for its outstanding support for the Forces community and recruitment of Reserve Force volunteers from units including 102 Field Squadron and 71 Engineer Regiment, Royal Engineers. Representatives of the firm were presented with a special certificate from the Lord Provost.

Captain Andrew Cowan, a Royal Naval Reserve Officer and Chairman of Lowland RFCA, said: “On behalf of the Board and the membership of the Association I must pass on our congratulations to all the award recipients who continue to make a positive contribution to the Defence of the nation, their communities and neighbourhoods.

“The Cadets and Reservists honoured tonight exemplify the benefits service in the Reserves, Cadet organisations and Armed Forces can bring. Equipping individuals with skills and experience that are useful life-skills and attractive to employers.

“It’s also an opportunity for us to recognise the commitment of employers who have signed the Armed Forces Covenant, including employers such as Tunnock’s and ElproSys. We congratulate them upon receiving their Bronze ERS awards.

“It is particularly exciting to have a new Lord Provost and new Lord Lieutenant and we congratulate Philip Braat on his appointment and thank him for his time during the evening.”

Her Majesty’s Lord-Lieutenants are representatives of the Crown, appointed by HM The Queen to be her personal representative in each county of the United Kingdom.

The Lord-Lieutenant’s Certificate of Meritorious Service is awarded to Reservists and Cadet Force Adult Volunteers who have provided exemplary service to their respective organisations and are recognised as laudatory honours throughout the Ministry of Defence.